Accurate predictions of changes to protein-ligand binding affinity in response to chemical modifications are of utility in small molecule lead optimization. Relative free energy perturbation (FEP) approaches are one of the most widely utilized for this goal, but involve significant computational cost, thus limiting their application to small sets of compounds. Lambda dynamics, also rigorously based on the principles of statistical mechanics, provides a more efficient alternative. In this paper, we describe the development of a workflow to setup, execute, and analyze Multi-Site Lambda Dynamics (MSLD) calculations run on GPUs with CHARMm implemented in BIOVIA Discovery Studio and Pipeline Pilot. The workflow establishes a framework for setting up simulation systems for exploratory screening of modifications to a lead compound, enabling the calculation of relative binding affinities of combinatorial libraries. To validate the workflow, a diverse dataset of congeneric ligands for seven proteins with experimental binding affinity data is examined. A protocol to automatically tailor fit biasing potentials iteratively to flatten the free energy landscape of any MSLD system is developed that enhances sampling and allows for efficient estimation of free energy differences. The protocol is first validated on a large number of ligand subsets that model diverse substituents, which shows accurate and reliable performance. The scalability of the workflow is also tested to screen more than a hundred ligands modeled in a single system, which also resulted in accurate predictions. With a cumulative sampling time of 150ns or less, the method results in average unsigned errors of under 1 kcal/mol in most cases for both small and large combinatorial libraries. For the multi-site systems examined, the method is estimated to be more than an order of magnitude more efficient than contemporary FEP applications. The results thus demonstrate the utility of the presented MSLD workflow to efficiently screen combinatorial libraries and explore chemical space around a lead compound, and thus are of utility in lead optimization. 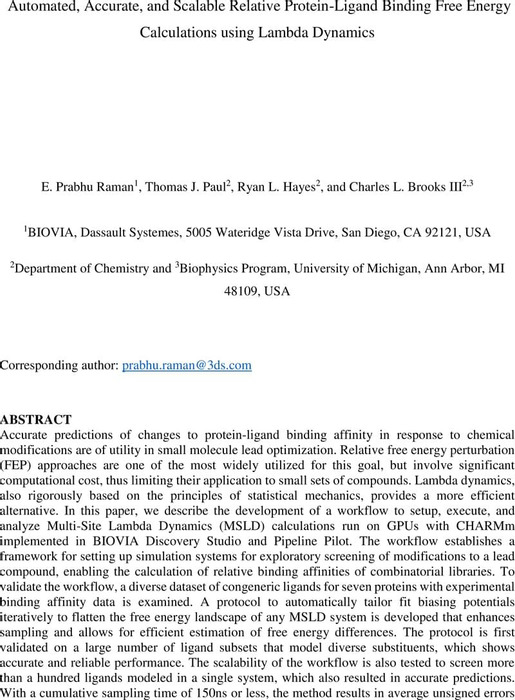 download asset preprint_manuscript_raman_etal.pdf 2 MB [opens in a new tab] cloud_download
pdf : 2 MB
We are encoding your file so that it is compatible across browsers, depending on file size and type this may take some time. 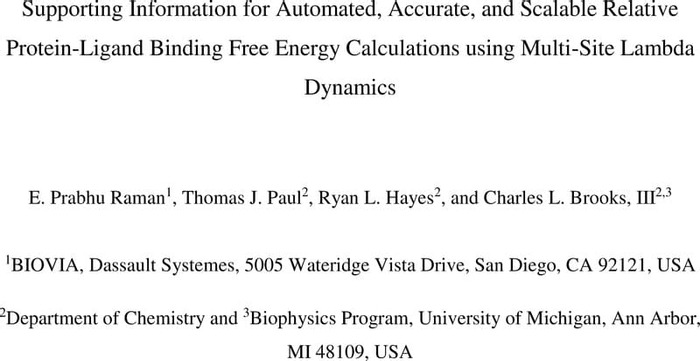 download asset raman_etal_Supporting_Info.pdf 0.56 MB [opens in a new tab] cloud_download
pdf : 0.56 MB
We are encoding your file so that it is compatible across browsers, depending on file size and type this may take some time.
raman etal Supporting Info