Saturation transfer difference (STD) NMR spectroscopy is a well‑known ligand‑based solution NMR technique used extensively for ligand epitope mapping, the identification of the nature of ligand binding sites, and the determination of ligand binding affinity. Recently, we have shown that STD NMR can be also applied to monitor changes in bound water during gelation of particulate dispersions. However, this technique is strongly dependent on gelator and solvent concentrations and does not report on the degree of organisation of the solvent within the particle network. This obscures the detailed understanding of the role of the solvent on gelation and precludes the comparison of solvation properties between dispersions prepared under different experimental conditions. In this work we report a novel STD NMR method to characterise the degree of solvent structuration in carbohydrate-based particulate dispersions by demonstrating for the first time that, for solvents interacting with large particles, the spin diffusion transfer build‑up curves can be modelled by the general one‑dimensional diffusion equation. Our novel approach, called Spin Diffusion Transfer Difference (SDTD) NMR, is independent of the gelator and solvent concentrations, allowing to monitor and compare the degree of solvent structuration in different gel networks. In addition, the simulation of SDTD build-up curves report on minimum distances (r) and spin diffusion rates (D) at the particle‑solvent interface. As a case study, we have characterised the degree of structuration of water and low molecular weight alcohols during the alcohol‑induced gelation of TEMPO-oxidised cellulose hydrogels by SDTD NMR, demonstrating the key role of water structuration on gel properties. SDTD NMR is a fast, robust and easy-to-implement solution NMR protocol that overcomes some of the limitations of the classical STD NMR approach when applied to the study of solvation. This technique can be readily extended to characterise the solvent(s) organisation in any type of particulate gels. Hence, the SDTD NMR method provides key insights on the role of water in the mechanism of gelation and the macroscopic properties of particulate gels, of fundamental importance for the design of soft matter materials with tuneable properties. 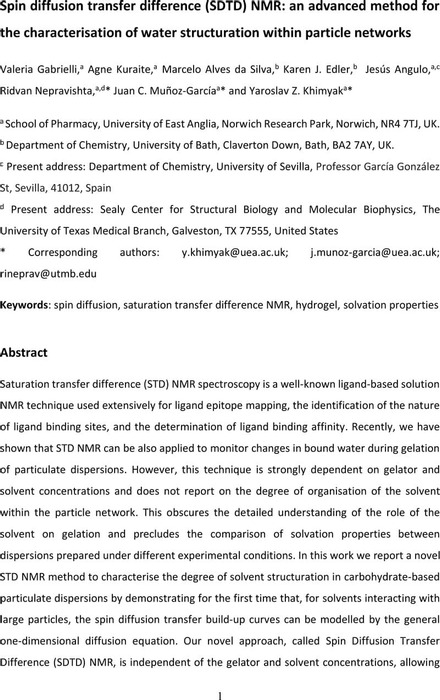 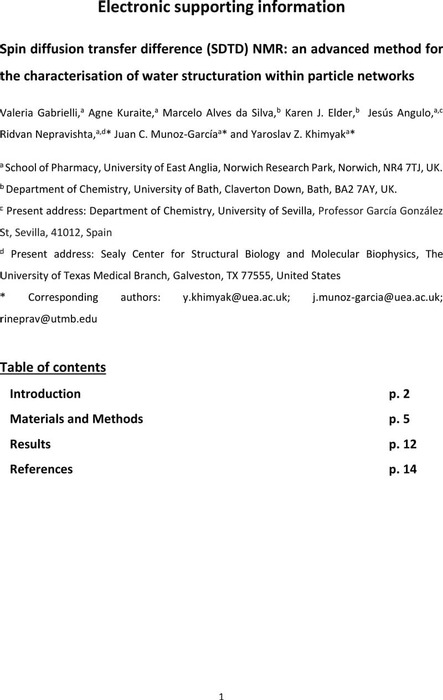 We are encoding your file so that it is compatible across browsers, depending on file size and type this may take some time.
ChemRxiv ESI Nepravishta Muñoz-García Khimyak