Biomimetic total synthesis has played a pivotal role in the development of synthetic organic chemistry. In particular, efforts aimed at mimicking the head-to-tail (HT) cation–π cyclization cascades invoked in terpene biosynthesis, such as those catalyzed by type-II cyclases, have led to a multitude of new synthetic methods, chemical concepts, and total syntheses over the past century. Conversely, synthetic methodology that mimics tail-to-head (TH) cation–π cyclization cascades, mediated by Mg2+ type-I terpene cyclases, remains elusive in organic synthesis, despite key roles in the biosynthesis of privileged therapeutic molecules such as taxol and artemesinin. Here we report that Li+/weakly-coordinating anion (WCA) salts catalyze the TH polycyclization of linaloyl fluoride, leading to high-yielding mixtures of polycyclic terpene natural products including cedrenes, cadinadiene, epizonarene, and 𝛿-selinene. The examples reported herein are the first small molecule-catalyzed TH polycyclization reactions enabling the shortest (formal) total synthesis of (±)-artemisinin. Moreover we apply this strategy to the diterpene geranyllinaloyl fluoride, resulting in a two-step total synthesis of the tricyclic core of the gersemiols (named here as α-gersemiene), a recently discovered class of marine diterpenoid natural products. 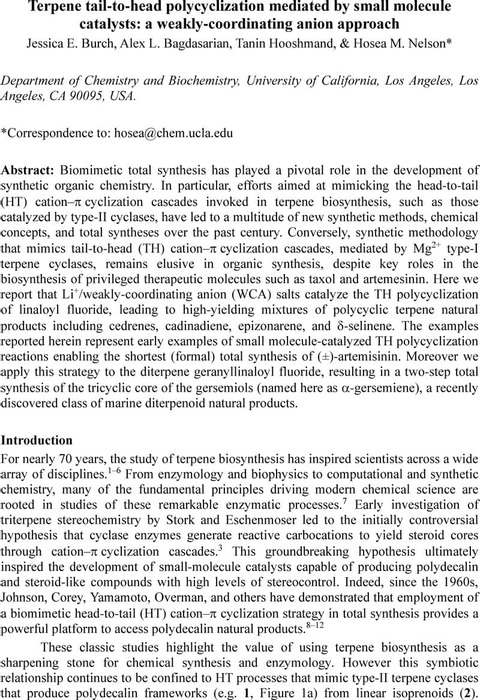 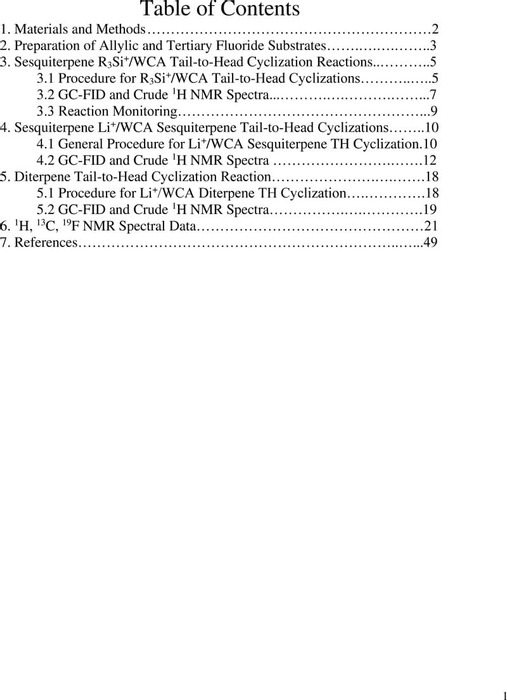 We are encoding your file so that it is compatible across browsers, depending on file size and type this may take some time.
Terpene SI