Zirconium based Metal-Organic Framework UiO-66 is to date considered one of the benchmark compound among stable MOFs and it has attracted a huge attention for its employment in many strategic applications. Large scale production of UiO-66 for industrial purposes requires the use of safe and green solvents, fulfilling the green chemistry principles and able to replace the use of N,N-Dimethyl-Formamide (DMF), which, despite its toxicity, is still considered the most efficient solvent for obtaining UiO-66 of high quality. Herein we report on a survey of about 40 different solvents with different polarity, boiling point and acidity, used for the laboratory scale synthesis of high quality UiO-66 crystals. The solvents were chosen according the European REACH Regulation 1907/2006 among those having low cost, low toxicity and fully biodegradable. Concerning MOF synthesis, the relevant parameters chosen for establishing the quality of the results obtained are the degree are the crystallinity, microporosity and specific surface area, yield and solvent recyclability. Taking into account also the chemical physical properties of all the solvents, a color code was assigned in order to give a final green assessment for the UiO-66 synthesis. Defectivity of the obtained products, the use of acidic modulators and the use of alternative Zr-salts have been also taken into consideration. Preliminary results lead to conclude that GVL (γ-valerolactone) is among the most promising solvents for replacing DMF in UiO-66 MOF synthesis. 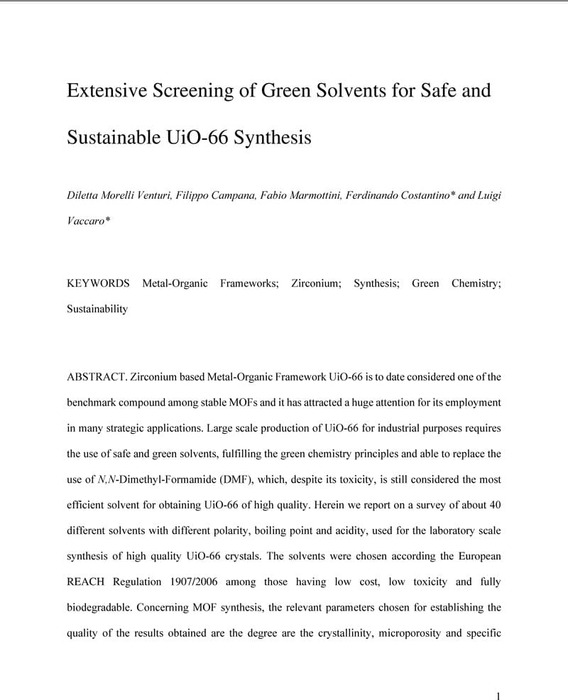 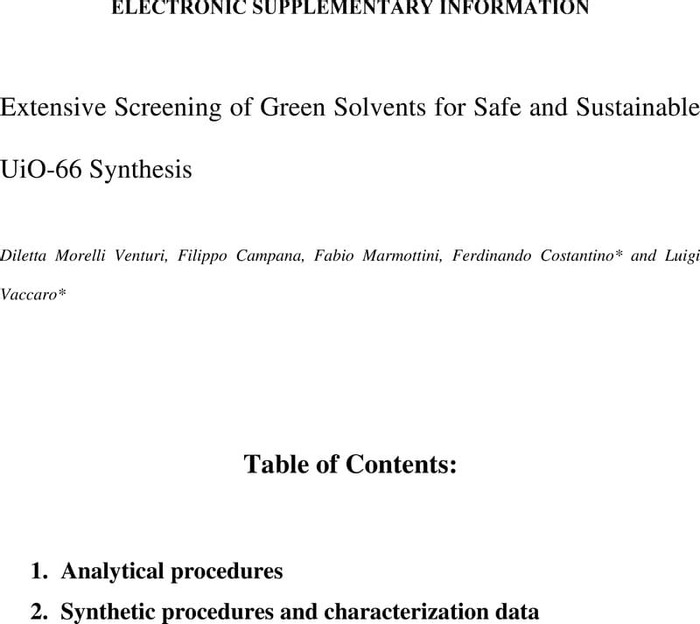 We are encoding your file so that it is compatible across browsers, depending on file size and type this may take some time.
Morelli supporting-info

We are encoding your file so that it is compatible across browsers, depending on file size and type this may take some time.
Morelli manuscript

We are encoding your file so that it is compatible across browsers, depending on file size and type this may take some time.
Morelli supporting-info