The cobalt species PPh4[CoIII(TAMLred)] is a competent and stable catalyst for the sulfimidation of (aryl)(alkyl)-substituted sulfides with iminoiodinanes reaching turnover numbers up to 900 and turnover frequencies of 640 min-1 under mild and aerobic conditions. The sulfimidation proceeds in a highly chemoselective manner, even in the presence of alkenes or weak C-H bonds, as supported by inter- and intramolecular competition experiments. Functionalization of the sulfide substituent with various electron-donating and electron-withdrawing arenes and several alkyl, benzyl and vinyl fragments is tolerated, with up to quantitative product yields. Sulfimidation of phenyl allyl sulfide led to [2,3]-sigmatropic rearrangement of the initially formed sulfimide species to afford the corresponding N-allyl-S-phenyl-thiohydroxylamines as attractive products. Mechanistic studies suggest that the actual nitrene transfer to the sulfide proceeds via (previously characterized) electrophilic nitrene-radical intermediates that afford the sulfimide products via electronically asynchronous transition states, in which SET from the sulfide to the nitrene-radical complex precedes N-S bond formation in a single concerted process. 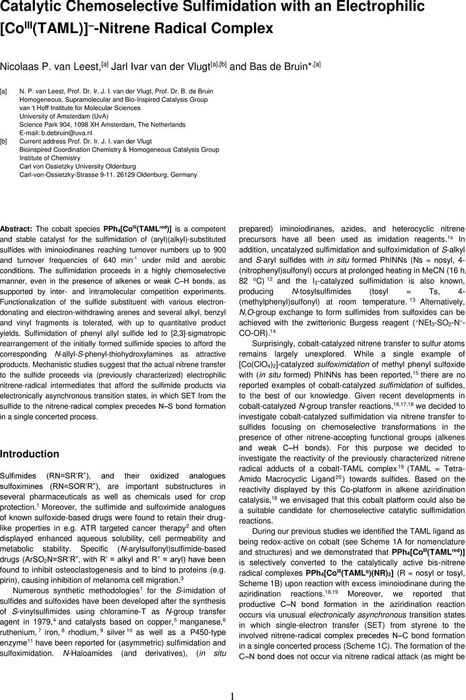 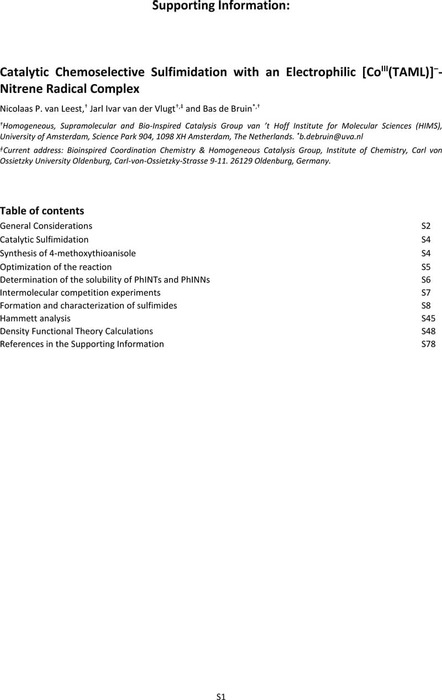 We are encoding your file so that it is compatible across browsers, depending on file size and type this may take some time.
Sulfimidation SI ChemRxiv