The selective oxidation of methane to methanol is a dream reaction of direct methane functionalization, which remains a key challenge in catalysis and a hot issue of controversy. Herein, we report the water-involved methane selective catalytic oxidation by dioxygen over copper-zeolites. At 573 K, a state-of-the-art methanol space-time yield of 543 mmol/molCu/h with methanol selectivity of 91 % is achieved with Cu-CHA catalyst. Temperature-programmed surface reactions with isotope labelling determine water as the dominating oxygen and hydrogen source of hydroxyl in methanol while dioxygen participates in the reaction through reducing to water. Spectroscopic analyses reveal the fast redox cycle of Cu2+-Cu+-Cu2+ during methane selective oxidation, which is closely related to the high catalytic activity of Cu-CHA. Density functional theory calculations suggest that both CuOH monomer and dimer in Cu-CHA can catalyze the selective oxidation of methane to methanol with Cu-OOH as the key reaction intermediate, and meanwhile, various copper sites undergo interconversion under reaction conditions. 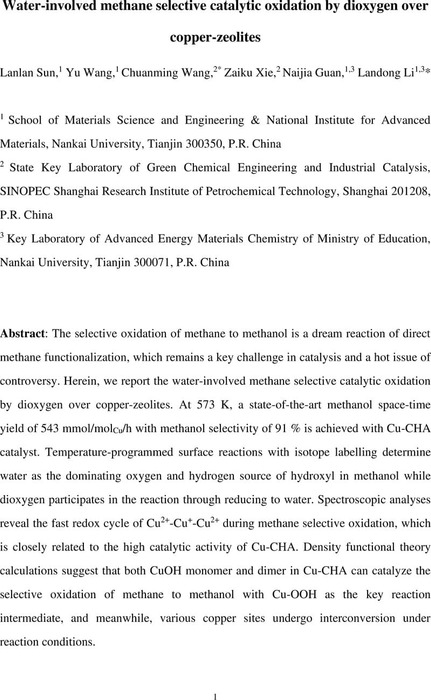 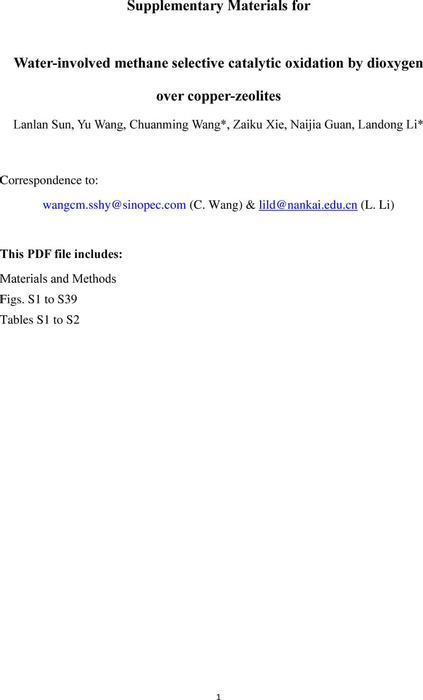 We are encoding your file so that it is compatible across browsers, depending on file size and type this may take some time.
Supplementary Materials