Many biological species apply the power amplification mechanism for locomotion, feeding, and protection. In power amplification, a biological system rapidly releases stored-energy by achieving a very high velocity over a short period of time, resulting in high power output. Such power amplification allows insects such as locust to jump and Mantis shrimp to kill prey by its appendage strike. Biological elastomeric polymers such as resilin play a vital role in the power amplification process because of their high stretchability and resilience. In synthetic materials, although
crosslinked rubbers display high stretchability and resilience, such is difficult to achieve in the water-containing systems such as in hydrogels, commonly considered materials for mimicking biological tissues. Here, we have used a simple free-radical polymerization of acrylic acid (AAc), methacrylamide (MAAm), and polypropylene glycol diacrylate (PPGDA) to obtain hydrogels. In these gels, the polymerized AAc and MAAm act as hydrophilic blocks and PPG as hydrophobic, and the gel structure resemble that of resilin consisting of hydrophilic and hydrophobic components. The bioinspired gels display very high stretchability, as high as eight times the original length, and greater than 90% resilience. In addition, the gel samples can reach a retraction velocity of 16 m/s with an acceleration of 4X10^3 m/s2. These values are similar or better than those observed in water containing biological systems, such as appendage strikes in Mantis shrimp, etc. To the best of our knowledge, such performance has not been reported in the
literature for any water containing networks. 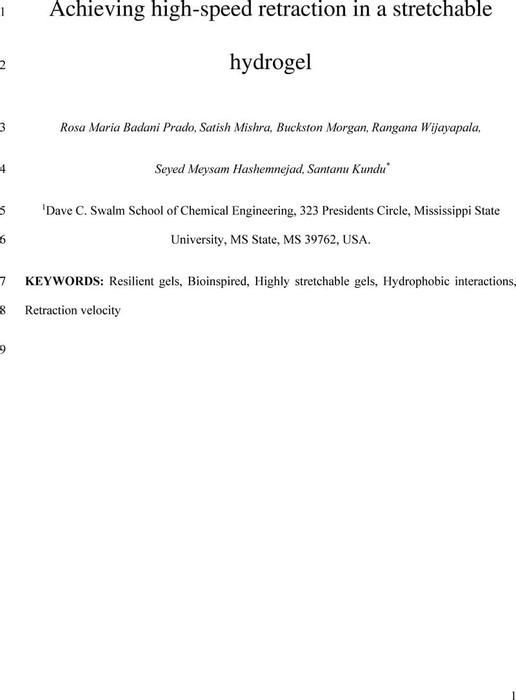