In Australia, party sparklers are commonly used to initiate or prepare inorganic based homemade explosives (HMEs) as they are the most easily accessible and inexpensive pyrotechnic available on the market. As sparkler residue would be encountered in cases involving these types of devices, the characterisation and source determination of the residue would be beneficial within a forensic investigation. The aim of this study is to demonstrate the potential of using trace elemental profiling coupled with chemometric and other statistical techniques to link a variety of different sparklers to their origin. Inductively coupled plasma – mass spectrometry (ICP-MS) was used to determine the concentration of 50 elements in 48 pre-blast sparkler samples from eight sparkler brands/classes available in Australia. Extracting ground-up sparkler residue in 10% nitric acid for 24 hours was found to give the most reliable quantification. The collected data were analysed using Principal Component Analysis (PCA) to visualise the distribution of the sample data and explore whether the sparkler samples could be classified into their respective brands. ANOVA based feature selection was used to remove elements that did not significantly contribute to the separation between classes. This resulted in the development of a 7-elemental profile, consisting of V, Co, Ni, Sr, Sn, Sb, W, which could be used to correctly classify the samples into eight distinct groups. Linear Discriminant Analysis (LDA) was subsequently used to construct a discriminant model using four out of six samples from each class. The model successfully classified 100% of the samples to their correct sparkler brand. The model also correctly matched 100% of the remaining samples to the correct class. This demonstrates the potential of using trace elemental analysis and chemometrics to correctly identify and discriminate between party sparklers. 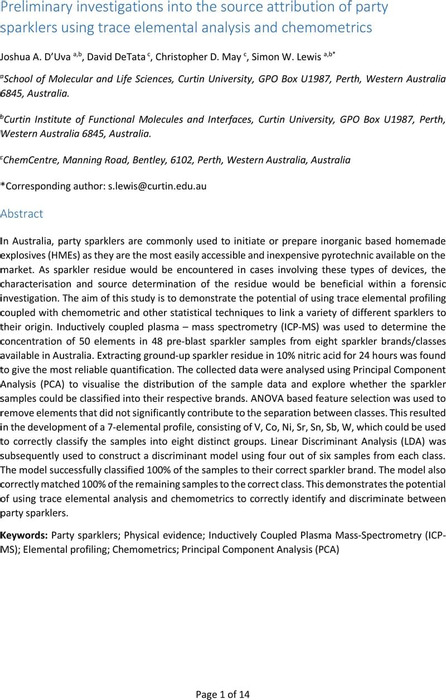 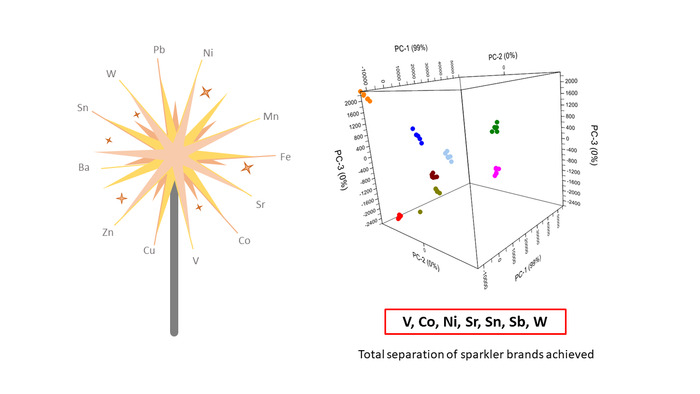 We are encoding your file so that it is compatible across browsers, depending on file size and type this may take some time.
Graphical abstract 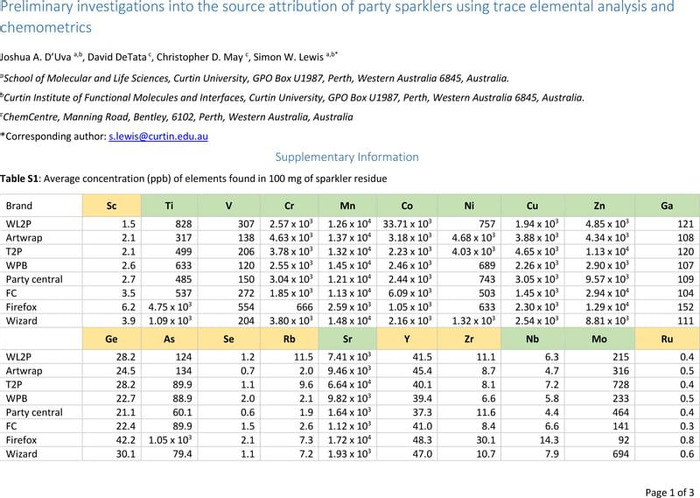 We are encoding your file so that it is compatible across browsers, depending on file size and type this may take some time.
Source attribution of sparklers ESI V1