The one-dimensional carbon allotrope carbyne, a linear chain of sp-hybridized carbon atoms, is predicted to exist in a polyynic and a cumulenic structure. While molecular forms of carbyne have been extensively characterized, the structural nature is hard to determine for many linear carbon wires that are made in-situ during pulling experiments. Here, we show that cumulenes and polyynes have distinctively different low-bias conductance profiles under axial torsion. We analyze the change of the electronic structure, Landauer transmission, and ballistic current density of the three types of closed-shell molecular carbynes as a function of the torsion angle. Both polyynic, odd-carbon cumulenic, and even-carbon cumulenic carbon wires exhibit helical frontier molecular orbitals when the end-groups are not in a co-planar configuration. This helical conjugation effect gives rise to strong ring current patterns around the linear wires. Only the transmission of even-carbon polyynic wires follows the well-known cosine-squared law with axial torsion that is also seen in biphenyl-type systems. Notably, the transmission of even-carbon cumulenic carbon wires rises with axial torsion from co-planar towards perpendicular orientation of the end-groups. The three distinct transmission profiles of polyynes, odd-carbon cumulenes, and even-carbon cumulenes may allow for experimental identification of the structural nature of linear carbon wires. Their different electron transport properties under axial torsion furthermore underline that, in the molecular limit of carbyne, three different subclasses of linear carbon wires exist. 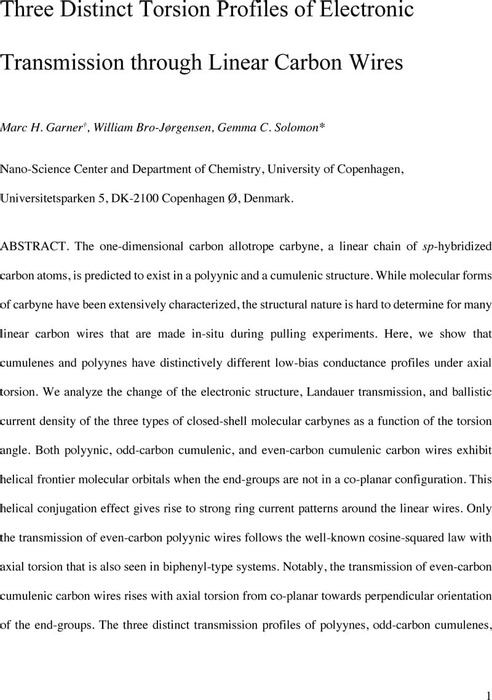 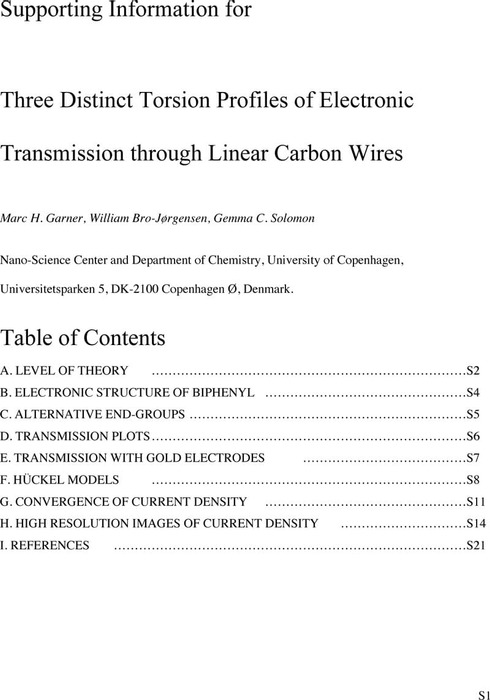 We are encoding your file so that it is compatible across browsers, depending on file size and type this may take some time.
SI chemrxiv3

We are encoding your file so that it is compatible across browsers, depending on file size and type this may take some time.
files