High pressure high temperature (HPHT) synthesis of crystallographically well-defined boron doped diamond (BDD) microparticles, suitable for electrochemical applications and using the lowest P and T (5.5 GPa and 1200°C) growth conditions to date, is reported. This is aided through the use of a metal (Fe-Ni) carbide forming catalyst and an aluminum dibromide (AlB2) boron source. The latter also acts as a nitrogen sequester, to reduce boron-nitrogen charge compensation effects. Raman microscopy and electrochemical measurements on individual microparticles reveal they are suitably doped to be considered metallic-like and contain negligible sp2 bonded carbon. A compaction process is used to create macroscopic porous electrodes from the BDD microparticles. Voltammetric analysis of the one-electron reduction of Ru(NH3)63+ reveals large capacitive and resistive components to the current-voltage curves, originating from solution trapped within the porous material. Scanning electrochemical cell microscopy (SECCM) is employed to map the local electrochemical activity and porosity at the micron scale. These electrodes retain the advantageous properties of polycrystalline BDD grown by chemical vapor deposition, such as large aqueous solvent window and resistance to corrosion, but with the additional benefits of a high, electrochemically accessible, surface area. 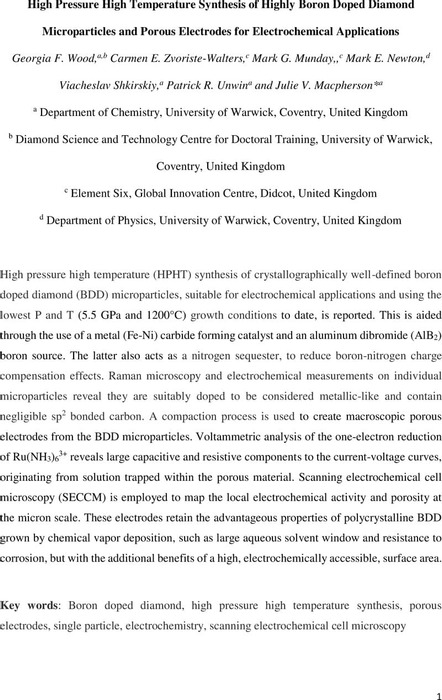 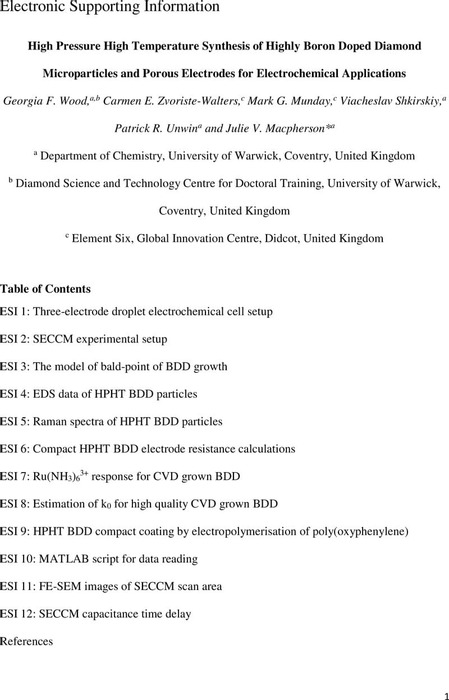 We are encoding your file so that it is compatible across browsers, depending on file size and type this may take some time.
Supporting Information v12 FINAL