Alginates gel rapidly under ambient conditions and have widely documented potential to form protective matrices for sensitive bioactive cargo. Most commonly, alginate gelation occurs via calcium mediated electrostatic crosslinks between the linear polyuronic acid polymers. A recent breakthrough to form crosslinked alginate microcapsules (CLAMs) by in situ gelation during spray drying (“CLAMs process”) has demonstrated applications in protection and controlled delivery of bioactives in food, cosmetics, and agriculture. The extent of crosslinking of alginates in CLAMs impacts the effectiveness of its barrier properties. For example, higher crosslinking extents can improve oxidative stability and limit diffusion of the encapsulated cargo. Crosslinking in CLAMs can be controlled by varying the calcium to alginate ratio; however, the choice of alginates used in the process also influences the ultimate extent of crosslinking. To understand how to select alginates to target crosslinking in CLAMs, we examined the roles of alginate molecular properties. A surprise finding was the formation of alginic acid in the CLAMs that is a consequence of simultaneous and rapid pH reduction and moisture removal that occurs during spray drying. Thus, spray dried CLAMs gelation is due to calcium crosslinking and alginic acid formation, and unlike external gelation methods, is insensitive to the molecular composition of the alginates. The ‘extent of gelation’ of spray dried CLAMs is influenced by the molecular weights of the alginates at saturating calcium concentrations. Alginate viscosity correlates with molecular weight; thus, viscosity is a convenient criterion for selecting commercial alginates to target gelation extent in CLAMs. 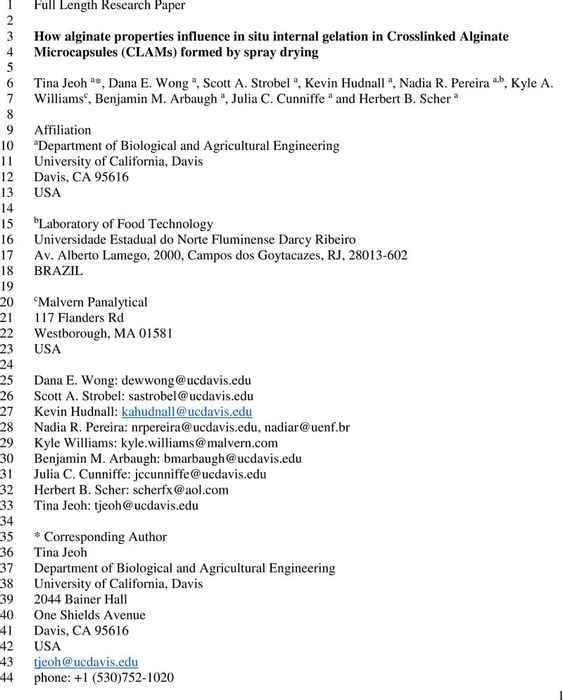 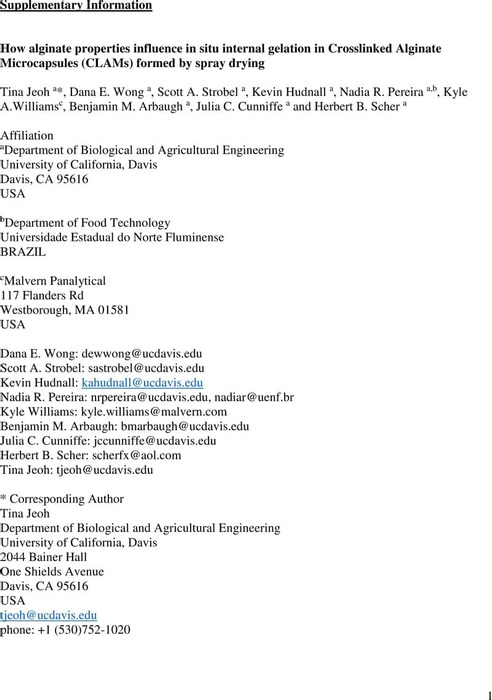 We are encoding your file so that it is compatible across browsers, depending on file size and type this may take some time.
200629 CLAMs crosslinking paper SI

Authors Jeoh, Strobel and Scher are inventors of the CLAMs process.