Annotation of untargeted high-resolution full-scan LC-MS metabolomics data remains challenging due to individual metabolites generating multiple LC-MS peaks arising from isotopes, adducts and fragments. Adduct annotation is a particular challenge, as the same mass difference between peaks can arise from adduct formation, fragmentation, or different biological species. To address this, here we describe a Buffer Modification Workflow (BMW), in which the same sample is run by LC-MS in both liquid chromatography solvent with 14NH3-acetate buffer, and in solvent with the buffer modified with 15NH3-formate. Buffer switching results in characteristic mass and signal intensity changes for adduct peaks, facilitating their annotation. This relatively simple and convenient chromatography modification annotated yeast metabolomics data with similar effectiveness to growing the yeast in isotope-labeled media. Application to mouse liver data annotated both known metabolite and known adduct peaks with 95% accuracy. Overall, it identified 26% of ~ 27,000 liver LC-MS features as putative metabolites, of which ~ 2600 showed HMDB or KEGG database formula match. This workflow is well-suited to biological samples that cannot be readily isotope labeled, including plants, mammalian tissues, and tumors.

This is revised version 2 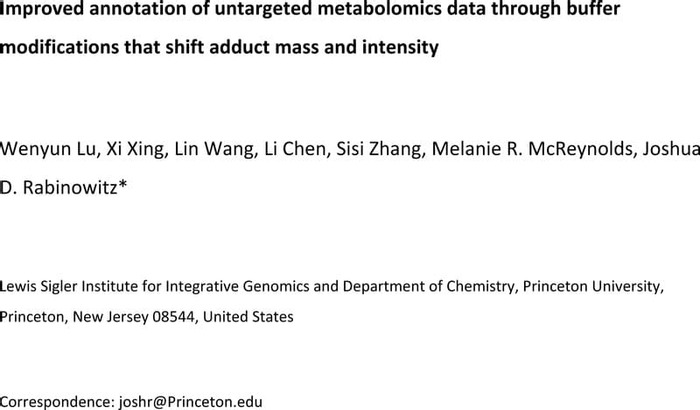