Parkinson’s disease (PD) is a progressive neurodegenerative disorder that does not currently have a robust clinical diagnostic test. Non-motor symptoms such as skin disorders have long since been associated with the disease and more recently a characteristic odour emanating from the skin of people with Parkinson’s has been identified. Here, dynamic head space (DHS) thermal desorption (TD) gas chromatography-mass spectrometry (GC-MS is implemented to directly measure the volatile components of sebum on swabs sampled from people with Parkinson’s – both drug naïve and those on PD medications (n= 100) and control subjects (n= 29). Supervised multivariate analyses of data showed 84.4 % correct classification of PD cases using all detected volatile compounds. Variable importance in projection (VIP) scores were generated from these data, which revealed eight features with VIP > 1 and p < 0.05 which all presented a downregulation within the control cohorts. Purified standards based on previously annotated biomarkers eicosane and octadecanal did not match to clinical data, although multiple metabolite features are annotated with these compounds all with high spectral matches indicating the presence of a series of similar structured species. DHS-TD-GC-MS analysis of a range of lipid standards has revealed the presence of common hydrocarbon species rather than differentiated intact compounds which are hypothesised to be breakdown products of lipids. This replication study validates that a differential volatile profile between control and PD cohorts can be measured using an analytical method that measures volatile compounds directly from skin swabs. 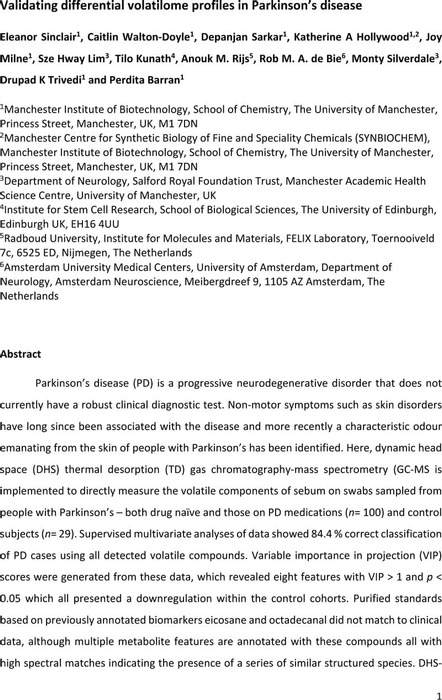 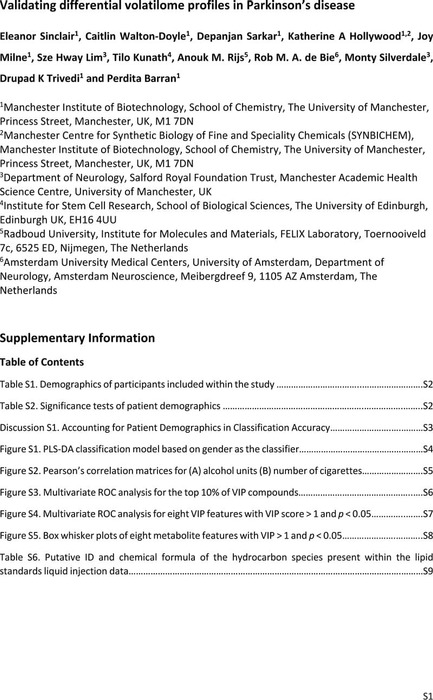 We are encoding your file so that it is compatible across browsers, depending on file size and type this may take some time.
Sinclair TDGCMS Supp