The emerging paradigm shift from ‘one molecule, one target, for one disease’ towards ‘multi-targeted small molecules’ has paved an ingenious pathway in drug discovery in recent years. This idea has been extracted for the investigation of competent drug molecules for the unprecedented COVID-19 pandemic which became the greatest global health crisis now. Perceiving the importance of organosulfur compounds against SARS-CoV-2 from the drugs under clinical trials, a class of organosulfur compounds effective against SARS-CoV were selected and studied the interaction with multiple proteins of the SARS-CoV-2. One compound displayed inhibition against five proteins (both structural and non-structural) of the virus namely, main protease, papain-like protease, spike protein, helicase and RNA dependent RNA polymerase. Consequently, this compound emanates as a potential candidate for treating the virulent disease. The pharmacokinetics, ADMET properties and target prediction studies carried out in this work further inflamed the versatility of the compound and urge to execute in-vitro and in-vivo analysis on SARS-CoV-2 in the future. 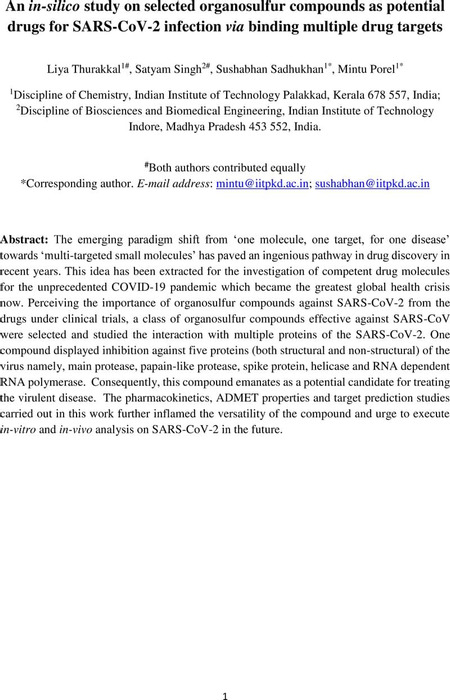