Supported MOx (M= Mo, V) on mixed CeO2-TiO2 were investigated for the oxidative dehydrogenation of ethane (ODHE) using CO2 as a mild oxidant. Raman spectroscopic characterization of the synthesized catalysts under dehydrated conditions suggest that surface MoOx species prefer to anchor on the crystalline domains of TiO2. Upon increasing the amount of CeO2 in the mixed oxide support, an intense and broad band at ~930cm-1 underscored that the prevalent species tend to be polymeric (MoOx)n domains. On the other hand, in the case of VOx catalysts, a gradual shift in the symmetric stretching of the vanadyl (V=O) Raman band with increasing CeO2 content was observed that points at the gradual anchoring of the surface vanadia species on both TiO2 and CeO2 thus highlighting the possible existence of the amorphous VOx to be located at the interface of the two mixed oxides. The catalytic behavior of Mo and V were distinct. As the ceria content in the support increased, MoOx catalysts promoted the ODHE via Mars van Krevelen mechanism while VOx catalysts appeared to favor ethane direct dehydrogenation. Investigation of structure-function relationships via in-situ Raman spectroscopic efforts revealed that adding ceria not only changed the redox properties of the support but also improved those of the deposited metal oxide. We also show that upon incorporation of ceria into the support, CO2 directly participates in the reoxidation of the dispersed MoOx species during catalysis. This effect was distinct from the reaction of CO2 in the reverse water gas shift reaction. Operando Raman spectra revealed that the presence of CO2 enhances the stability of the bridging Mo–O–Mo bond of polymeric molybdena domains, which is proposed to affect the relative contribution of oxidative versus non-oxidative pathways in ethane dehydrogenation. 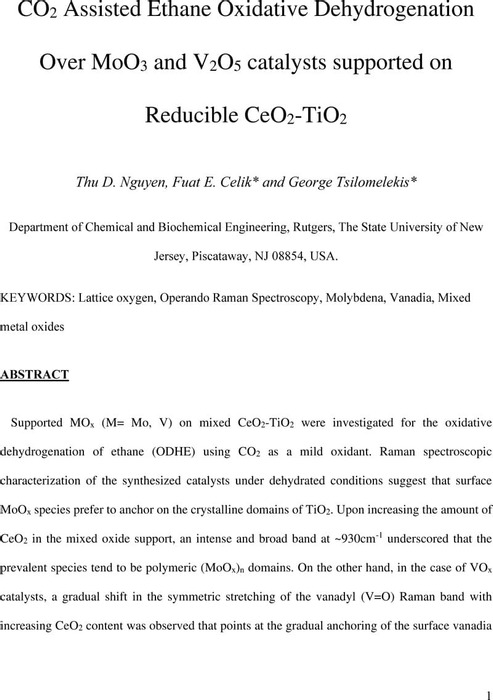 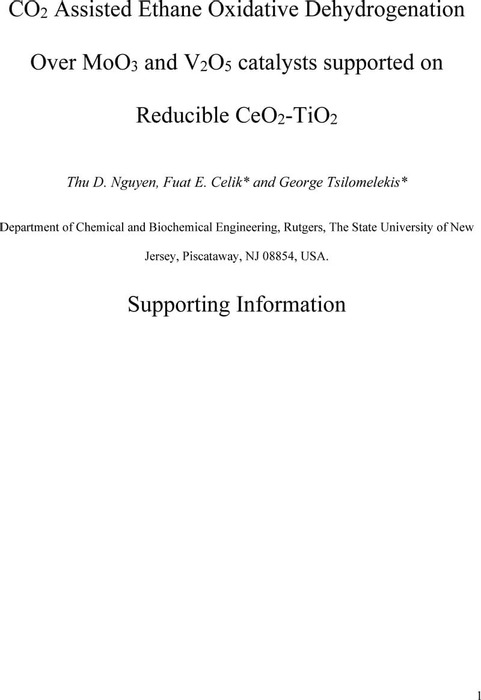 We are encoding your file so that it is compatible across browsers, depending on file size and type this may take some time.
Supporting information ODH Reducible