Skip to main content Accessibility information
We use cookies to distinguish you from other users and to provide you with a better experience on our websites. Close this message to accept cookies or find out how to manage your cookie settings. Learn more about our Privacy Notice... [opens in a new tab]
Energy
search

The replacement of the presently used liquid electrolytes by a non-flammable solid electrolyte is an important avenue to create safer batteries. The Natrium Superionic CONductor (NaSiCON) Na1+xZr2SixP3-xO12 (0 < x < 3) that displays high bulk ionic conductivity and good stability towards other NaSiCON-based electrodes is a good solid electrolyte in NaSiCON-based batteries. Despite the sizeable share of research on Na1+xZr2SixP3-xO12, the structural and thermodynamic properties of NaSiCON require better understanding for more efficient synthesis and optimization as a solid electrolyte, which often follows chemical intuition. Here, we analyze the thermodynamic properties of the NaSiCON electrolyte by constructing the Na1+xZr2SixP3-xO12 phase diagram, based on density functional theory calculations, a cluster expansion framework, and Monte Carlo simulations. Specifically, we build the phase diagram as a function of temperature and composition (0 < x < 3) for the high-temperature rhombohedral structure, which has been also observed in several positive electrode materials, such as Na3Ti2(PO4)3, Na3V2(PO4)3 and Na3Cr2(PO4)3. Through the phase diagram, we identify the concentration domains providing the highest Na+-ion conductivity and previously unreported phase-separation behavior across three different single-phase regions. Further, we note the similarities in the phase behavior between Na1+xZr2SixP3-xO12 and other NaSiCON-based mono-transition metal electrodes and discuss the potential competition between thermodynamics and kinetics in experimentally observed phase separation. Our work is an important addition in understanding the thermodynamics of NaSiCON-based materials and in the development of inexpensive Na-ion batteries. From our results we propose that the addition of SiO44– moieties to single-transition metal NaSiCON-phosphate-based electrodes will slow significantly the kinetics toward phase separation. 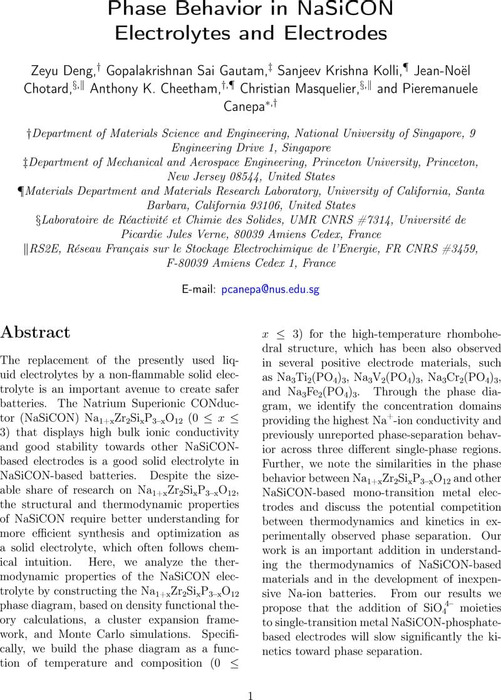