Organic semiconductors consisting of molecules bearing polar side chains have been proposed as potential candidates to overcome the limitations of organic photovoltaics owing to their enhanced dielectric constant. However, introducing such polar molecules in photovoltaic devices has not yet resulted in higher efficiencies. A microscopic understanding of the impact of polar side chains on electronic and structural properties of organic semiconductors is paramount to rationalize their effect. Here, we investigate the impact of such side chains on bulk heterojunction overall morphology, molecular configurations at donor-acceptor (DA) interfaces, and charge carrier energy levels. The multiscale modeling approach used allows to resolve DA interfaces with atomistic resolution while taking into account the large-scale self-organization process which takes place during the processing of an organic thin film. The polar fullerene-based blends are compared to the well-studied reference system, poly(3-hexyl-thiophene) (P3HT):phenyl-C61-butyric acid methyl ester (PCBM). Introduction of polar side chains on a similar molecular scaffold does not affect molecular orientations at the DA interfaces; such orientations are however found to be affected by processing conditions and polymer molecular weight. Polar side chains, instead, are found to impact considerably the charge carrier energy levels of the organic blend, causing electrostatic-induced broadening of these levels. 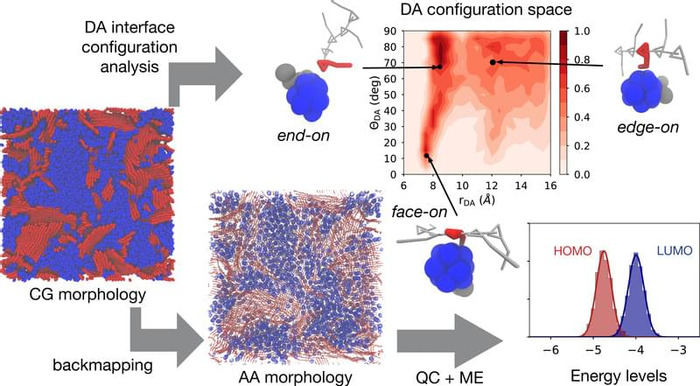 We are encoding your file so that it is compatible across browsers, depending on file size and type this may take some time.
DA and dipoles-TOC 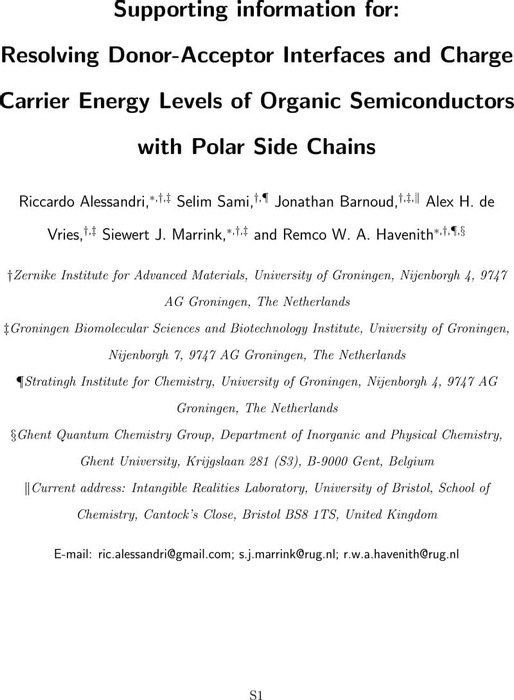 We are encoding your file so that it is compatible across browsers, depending on file size and type this may take some time.
DA and dipoles-SI