A computational approach to in silico drug discovery was carried out to identify small druglike compounds able to show structural and functional mimicry of the high affinity ligand X77, potent non-covalent inhibitor of SARS-COV-2 main protease (MPro). In doing so, the X77-mimetic candidates were predicted based on the crystal X77-MPro structure by a public web-oriented virtual screening platform Pharmit. Models of these candidates bound to SARS-COV-2 MPro were generated by molecular docking and optimized by the quantum chemical method PM7. At the final point, analysis of the interaction modes of the identified compounds with MPro and prediction of their binding affinity were carried out. Calculation revealed 5 top-ranking compounds that exhibited a high affinity to the active site of SARS-CoV-2 MPro. Insights into the ligandMPro models indicate that all identified compounds may effectively block the binding pocket of SARS-CoV-2 MPro, in line with the low values of binding free energy and dissociation constant. Mechanism of binding of these compounds to MPro is generally provided by hydrogen bonds and van der Waals interactions with the functionally important residues of the enzyme active site, such as His-41, Leu-141, His-163, Met-165, and Glu166. In addition, individual ligands form salt bridges with the MPro residues His-163 or Glu-166 and participate in specific - interactions with the catalytic dyad residue His-41. The data obtained show that the identified X77-mimetic candidates may serve as good scaffolds for the design of novel antiviral agents able to target the active site of SARS-CoV-2 MPro. 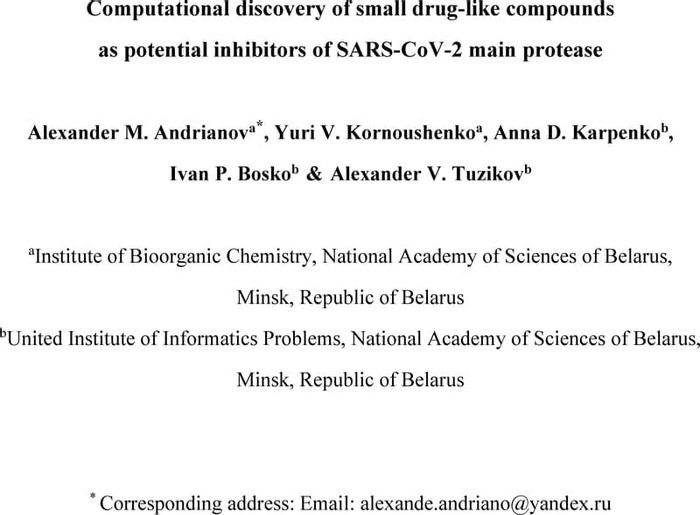 download asset AndrianovA_chemRxiv_may_8_2020.pdf 1 MB [opens in a new tab] cloud_download
pdf : 1 MB
We are encoding your file so that it is compatible across browsers, depending on file size and type this may take some time.