A series of model polyelectrolyte complex micelles (PCMs) was prepared to investigate the consequences of neutral and zwitterionic chemistries and distinct charged cores on the size and stability of nanocarriers. Using aqueous reversible addition-fragmentation chain transfer (RAFT) polymerization, we synthesized a well-defined diblock polyelectrolyte system, poly(2-methacryloyloxyethyl phosphorylcholine methacrylate)-block-poly((vinylbenzyl) trimethylammonium) (PMPC-PVBTMA), at various neutral and charged block lengths to compare directly against PCM structure-property relationships centered on poly(ethylene glycol)-block-poly((vinylbenzyl) trimethylammonium) (PEG-PVBTMA) and poly(ethylene glycol)-block-poly(lysine) (PEG-PLK). After complexation with a common polyanion, poly(sodium acrylate), the resulting PCMs were characterized by dynamic light scattering (DLS) and small angle X-ray scattering (SAXS). We observed uniform assemblies of spherical micelles with a core diameter of ~40 nm when PMPC-PVBTMA was used, and smaller particles between 20-30 nm for PEG-PLK and PEG-PVBTMA via SAXS analysis. Additionally, PEG-PLK PCMs proved most resistant to dissolution by both monovalent and divalent salt, followed by PEG-PVBTMA then PMPC-PVBTMA. All micelle systems were serum stable in 100% fetal bovine serum over the course of 8 h by time-resolved DLS, demonstrating minimal interactions with serum proteins and potential as in vivo drug delivery vehicles. This thorough study of the synthesis, assembly, and characterization of zwitterionic polymers in PCMs advances the design space for charge-driven micelle assemblies. 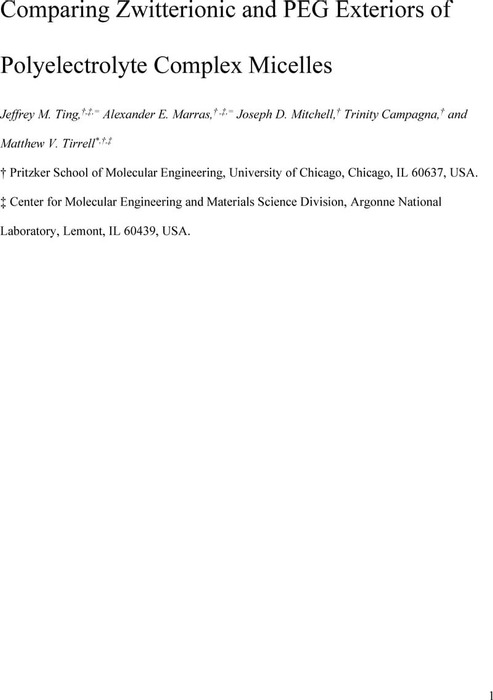 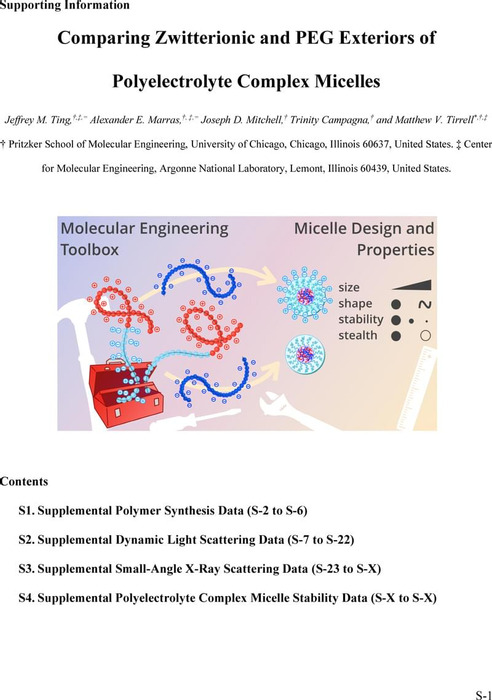 We are encoding your file so that it is compatible across browsers, depending on file size and type this may take some time.
SI-fin