The dissemination of a novel corona virus, SARS-CoV-2, through rapid human to human transmission has led to a global health emergency. The lack of a vaccine or medication for effective treatment of this disease has made it imperative for developing novel drug discovery approaches. Repurposing of drugs is one such method currently being used to tackle the viral infection. The genome of SARS-CoV-2 replicates due to the functioning of a main protease called Mpro. By targeting the active site of Mpro with potential inhibitors, this could prevent viral replication from taking place. Blind docking technique was used to investigate the interactions between 29 naturally occurring coumarin compounds and SARS-CoV-2 main protease, Mpro, out of which 17 coumarin compounds were seen to bind to the active site through the interaction with the catalytic dyad, His41 and Cys145, along with other neighbouring residues. On comparing the ΔG values of the coumarins bound to the active site of Mpro, corymbocoumarin belonging to the class pyranocoumarins, methylgalbanate belonging to the class simple coumarins and heraclenol belonging to the class furanocoumarins, displayed best binding efficiency and could be considered as potential Mpro protease inhibitors. Preliminary screening of these naturally occurring coumarin compounds as potential SARS-CoV-2 replication inhibitors acts as a stepping stone for further in vitro and in vivo experimental investigation and analytical validation. 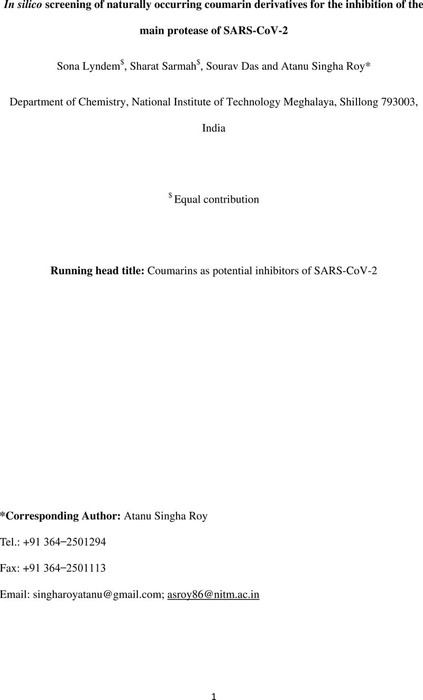 download asset Coumarins as potential inhibitors of SARS-CoV-2.pdf 1 MB [opens in a new tab] cloud_download
pdf : 1 MB
We are encoding your file so that it is compatible across browsers, depending on file size and type this may take some time.