The photodissociation dynamics of the tert-butyl perthiyl (t-BuSS) radical are investigated by fast-beam coincidence translational spectroscopy. A fast (6-8 keV) beam of neutral t-BuSS radicals is produced via photodetachment of the corresponding anion, followed by photodissociation at 248 nm (5.00 eV) or 193 nm (6.42 eV) and coincident detection of the neutral products. Photofragment mass and translational energy distributions are obtained at both wavelengths. At 248 nm, the dominant product channel (90%) is found to be S loss, with a product translational energy distribution that peaks close to the maximum available energy and an anisotropic photofragment angular distribution, indicating dissociation along a repulsive excited state. A minor channel (10%) leading to the formation of S2 + t-Bu is also observed. At 193 nm, both two- and three-body dissociation are observed. Formation of S2 + t-Bu is the dominant two-body product channel, with multiple electronic states of the S2 molecule produced via excited state dissociation processes. Formation of S + t-BuS is a minor two-body channel at this dissociation energy. The three-body channels are S2 + H + isobutene, S2 + CH3 + propene, and S + SH + isobutene. The first two of these channels result from a sequential dissociation process in which loss of S2 from t-BuSS results in ground state t-Bu with sufficient internal energy to undergo secondary fragmentation. The third three-body channel, S + SH + isobutene, is attributed to loss of internally excited HS2 from t-BuSS, which then rapidly dissociates to form S + SH in an asynchronous concerted dissociation process. 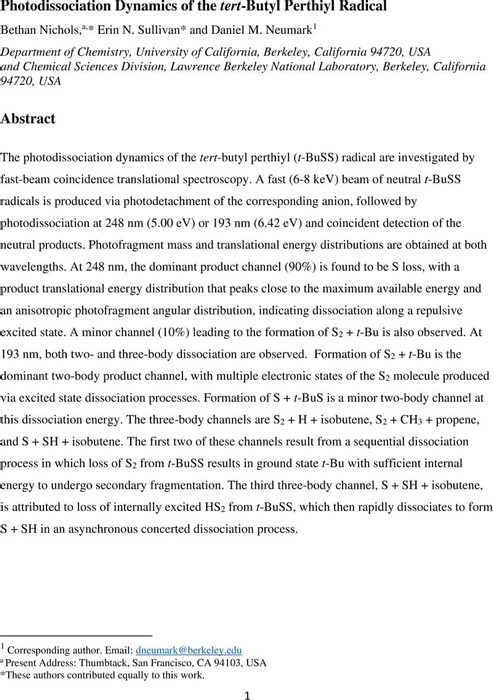 We are encoding your file so that it is compatible across browsers, depending on file size and type this may take some time.
tBuSS SM rxiv

The authors have no conflict of interest.