In situ visualization of the recognition and interaction between proteins and drug damaged DNA at single cell level is highly important for understanding the molecular mechanism of action of DNA targeting drugs, yet a great challenge. We herein report a novel approach, termed as correlated optical and secondary ion mass spectrometric imaging (COSIMSi), for exploring the recognition between proteins and cisplatin-damaged DNA in single cells. Genetically encoded EYFP-fused HMGB1, an in vitro well-known specific binder of cisplatin-damaged DNA, and dye-stained DNA, and cisplatin were mapped by LSCM and ToF-SIMS imaging, respectively. The LSCM and SIMS images were aligned with aiding of an addressable silicon wafer to generate fused images, in which the co-localization of the fluorescence and MS signals indicated the formation of HMGB1-Pt-DNA ternary complexes in a dose- and time-dependent manner. In contrast, COSIMSi showed that little HMGB1(F37A)-Pt-DNA complex was produced under the same conditions. Moreover, we demonstrated for the first time that cisplatin lesion on DNA prevented a DNA-binding protein Smad3 from interacting with DNA. These results verify that the COSIMSi is an effective and straightforward tool for in situ visualization of recognition and interaction between proteins and specific damaged DNA in single cells. 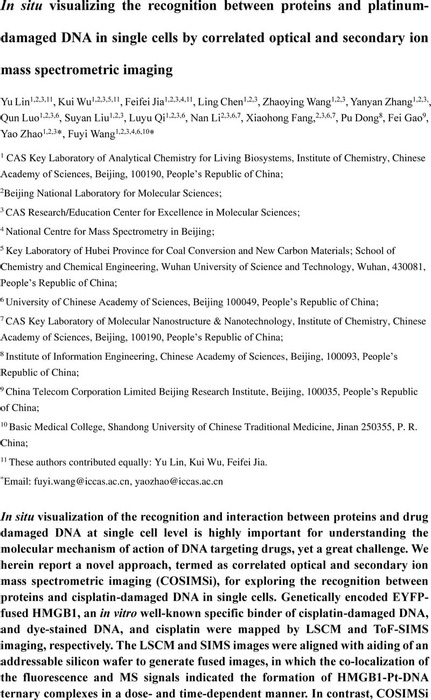 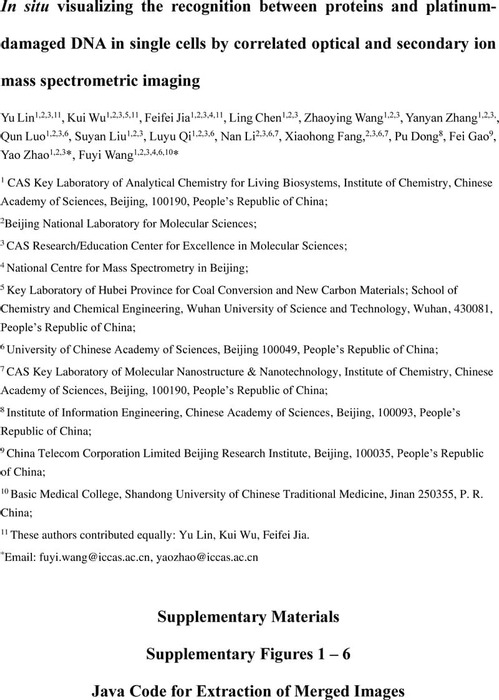 We are encoding your file so that it is compatible across browsers, depending on file size and type this may take some time.
Visualization of Protein-DNA Interactions in Single Cells-SI

The authors declare no competing interests.