Abstract: What happens when a C−H bond is forced to interact with unpaired pairs of electrons at a positively charged metal? Such interactions can be considered as “contra-electrostatic” H-bonds, which combine the familiar orbital interaction pattern characteristic for the covalent contribution to the conventional H-bonding with an unusual contra-electrostatic component. Whereas electrostatics is strongly stabilizing in the conventional C−H•••X bonds where X is an electronegative main group element, it is destabilizing in the C−H•••M contacts when M is Au(I), Ag(I), or Cu(I) of NHC−M−Cl systems. Such remarkable C−H•••M interaction became experimentally accessible within (a-ICyDMe)MCl, NHC−Metal complexes embedded into cyclodextrins. Computational analysis of the model systems suggests that the overall interaction energies are relatively insensitive to moderate variations in the directionality of interaction between a C−H bond and the metal center, indicating stereoelectronic promiscuity of fully filled set of d-orbitals. A combination of experimental and computational data demonstrates that metal encapsulation inside the cyclodextrin cavity forces the C−H bond to point toward the metal, and reveals a still attractive “contra-electrostatic” H-bonding interaction. 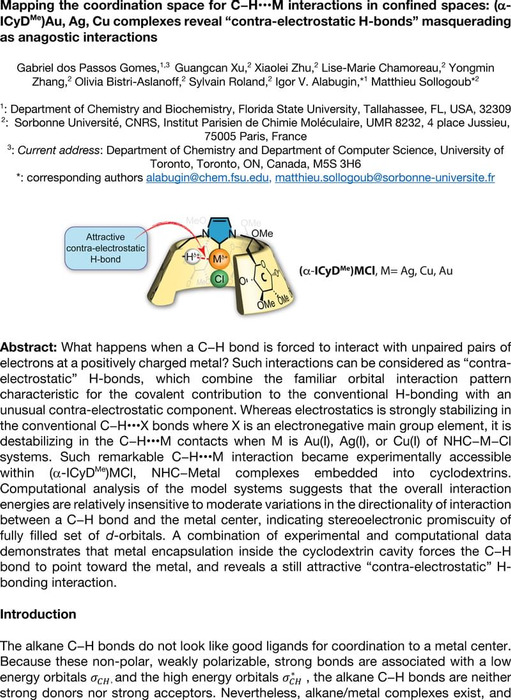 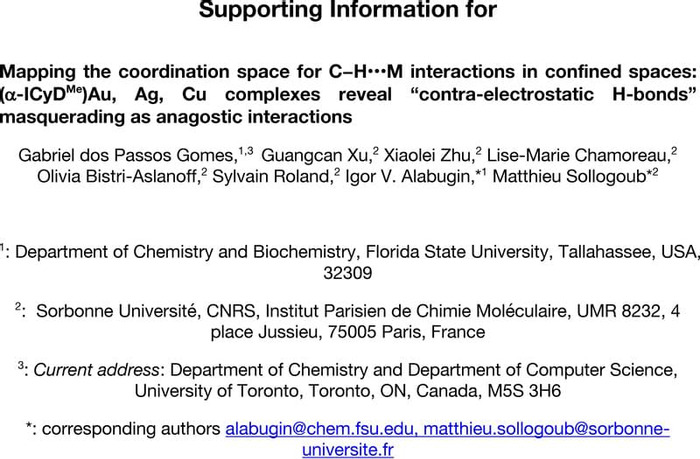 We are encoding your file so that it is compatible across browsers, depending on file size and type this may take some time.
SI Ag Au Cu cyclodextrins 04 23 2020 ChemRxiv v1

We are encoding your file so that it is compatible across browsers, depending on file size and type this may take some time.
toc