Machine learning techniques, specifically Gradient-Enhanced Kriging (GEK), has been implemented for molecular geometry optimization.
GEK has many advantages as compared to conventional -- step-restricted second-order truncated -- molecular optimization methods.
In particular, the surrogate model associated with GEK can have multiple stationary points, will smoothly converge to the
exact model as the size of the data set increases, and contains an explicit expression for the expected average error of the model function
at an arbitrary point in space.
In this respect GEK can be of interest for methods used in molecular geometry optimizations.
GEK is usually, however, associated with abundance of data, contrary to the situation desired for
efficient geometry optimizations.
In the paper we will demonstrate how the GEK procedure can be utilized in a fashion such that in the presence of few data points, the
surrogate surface will in a robust way guide the optimization to a minimum of a molecular structure.
In this respect the GEK procedure will be used to mimic the behavior of a conventional second-order scheme, but retaining the
flexibility of the superior machine learning approach -- GEK is an exact interpolator.
Moreover, the expected variance will be used in the optimization to facilitate restricted-variance rational function optimizations (RV-RFO).
A procedure which relates the eigenvalues of the Hessian-model-function Hessian with the individual characteristic
lengths, used in the GEK, reduces the number of empirical parameters to two -- the value of the trend function and the
maximum allowed variance. These parameters are determined using the extended Baker (e-Baker) test suite, at the Hartree-Fock level of approximation,
and a single reaction of the Baker transition-state (Baker-TS) test suite as a training set. The so-created optimization
procedure -- RV-RFO-GEK -- is tested using the e-Baker, the full Baker-TS, and the S22 test suites, at the density-functional-theory level for the two Baker test suites
and at the second order Møller-Plesset level of approximation for the S22 test suite, respectively.
The tests show that the new method is generally on par with a state-of-the-art conventional method, while for difficult cases it exhibits a definite advantage. 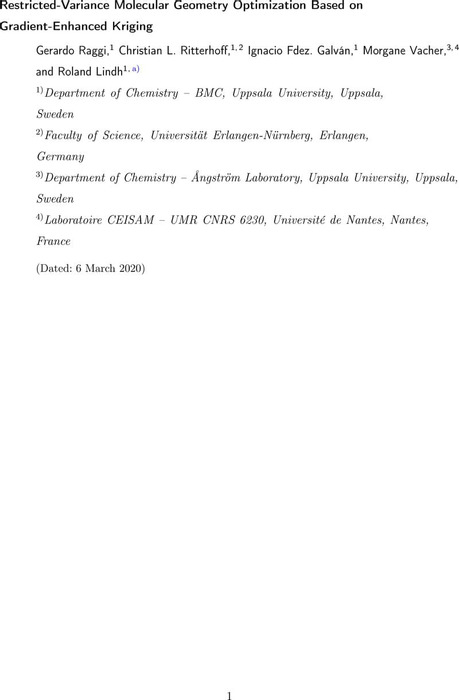