Developing cost-effective and rational hole transporting materials is critical for fabricating high-performance perovskite solar cells (PSCs) and to promote their commercial endeavor. We have designed and developed pyridine (core) bridging diphenylamine-substituted carbazole (arm) small molecules, named as 2,6PyDANCBZ and 3,5PyDANCBZ. The linking topology of core and arm on their photophysical, thermal, semiconducting and photovoltaic properties were probed systematically. We found that the 2,6PyDANCBZ shows higher mobility and conductivity along with uniform film-forming ability as compared to 3,5PyDANCBZ. The PSCs fabricated with 2,6PyDANCBZ supersede the performance delivered by Spiro-OMeTAD, and importantly also gave improved long-term stability. Our findings put forward small molecules based on core-arm linking topology for cost-effective hole selective layers designing. 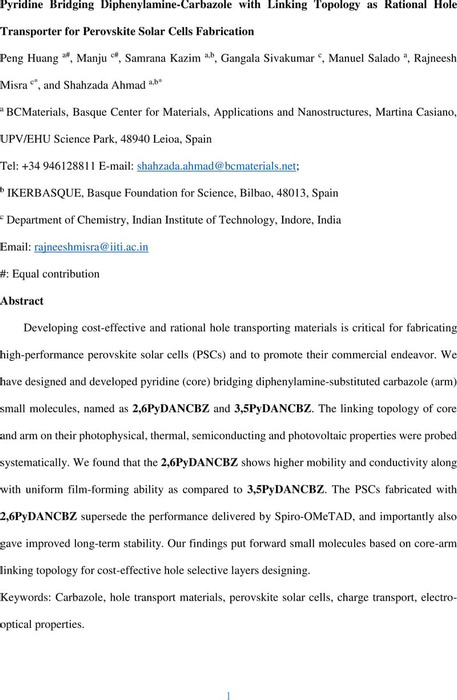 no conflict of interest to declare