The complexity of the simplest conceivable cell suggests that a systems chemistry approach is required to
understand and potentially recapitulate the intricate network of prebiotic reactions that led to the emergence
of life. Early cells probably relied upon compatible and interconnected chemistries to link RNA, peptides and
membranes. Here we show that several types of vesicles, formed from prebiotically plausible mixtures of
amphiphiles, allow activation of amino acids, peptides and nucleotides. Interestingly, activation chemistry
drives the advantageous conversion of reactive amphiphiles into inert cyclophospholipids, thus supporting
their potential role as major constituents of primitive cells. Moreover, activation of prebiotic building blocks
within fatty acid-based vesicles yields lipidated species capable of localizing and functionalizing primitive
membranes. Our findings describe a potentially prebiotic scenario in which the components of primitive cells
could undergo activation, providing new species that might have enabled an increase in the functionality of
emerging cells. 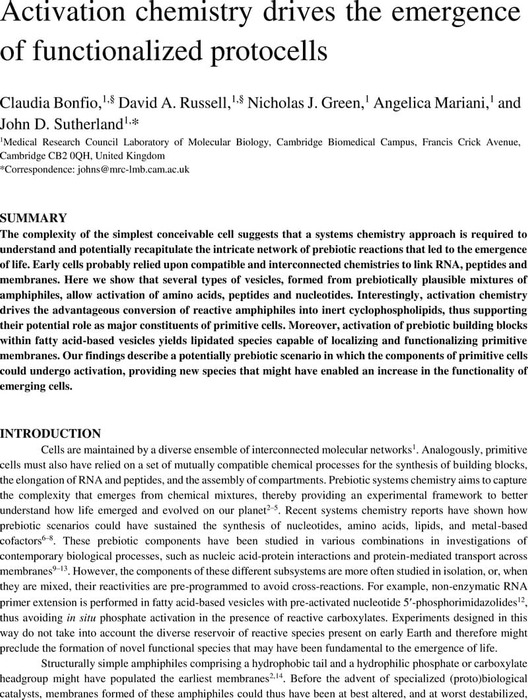 download asset Bonfio et al_Chemrxiv.pdf 3 MB [opens in a new tab] cloud_download
pdf : 3 MB
We are encoding your file so that it is compatible across browsers, depending on file size and type this may take some time.