In the recent years, the dearomatization of phenols with the addition of nucleophiles to the aromatic ring, induced by hypervalent iodine(III) reagents and catalysts, has emerged as a highly useful synthetic approach. However, experimental mechanistic studies of this important process have been extremely scarce. As a result, the mechanism of the reaction remained elusive and as of today there exist as many as three distinct mechanistic proposals. In this report, we describe systematic investigations of the dearomatizing hydroxylation of phenols using an array of experimental techniques. Kinetics, EPR spectroscopy, and reactions with radical probes demonstrate that all the previously suggested mechanisms are incorrect, and that the transformation in fact proceeds via a radical-chain mechanism, with the aryloxyl radical being the key chain-carrying intermediate. Moreover, UV and NMR spectroscopy, high-resolution mass spectrometry, and cyclic voltammetry show that before reacting with the aryloxyl radical, water molecule becomes activated by the interaction with the iodine(III) center, causing this formally nucleophilic substrate to act as an electrophile. The C–O bond formation is identified as the rate-determining step of the reaction. This step generates the dearomatized product and an iodanyl(II) species, which is the second chain-carrying radical. The radical-chain mechanism emerging from our investigations allows to rationalize all other existing observations regarding the iodine(III)-promoted oxidative dearomatization of phenols. 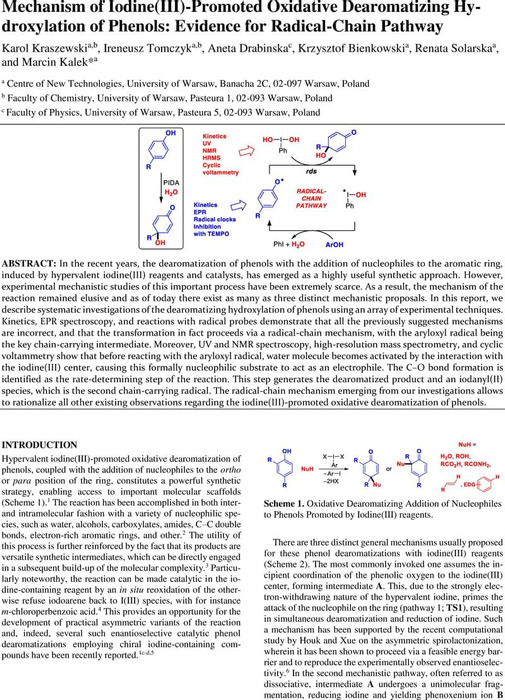 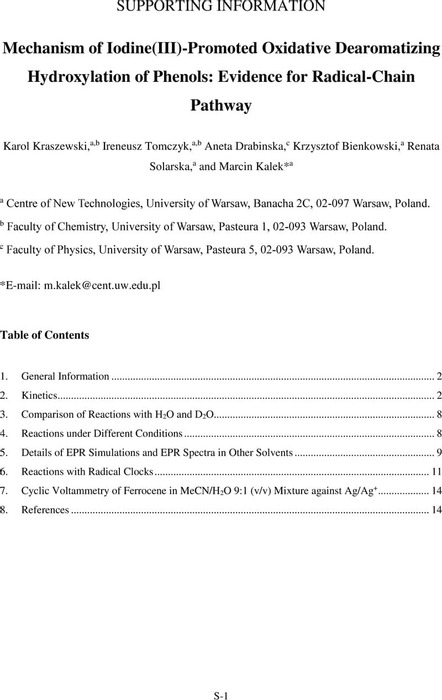 We are encoding your file so that it is compatible across browsers, depending on file size and type this may take some time.
SI dearomatization f