SARS-CoV-2 or COVID-19 has caused more than 10,00,000 infections and ~55,000 deaths worldwide spanning over 203 countries, and the numbers are exponentially increasing. Due to urgent need of treating the SARS infection, many approved, pre-clinical, anti-viral, anti-malarial and anti-SARS drugs are being administered to patients. SARS-CoV-2 papain-like protease (PLpro) has a protease domain which cleaves the viral polyproteins a/b, necessary for its survival and replication, and is one of the drug target against SARS-CoV-2. 3D structures of SARS-CoV-2 PLpro were built by homology modelling. Two models having partially open and closed conformations were used in our study. Virtual screening of natural product compounds was performed. We prepared an in house library of compounds found in rhizomes, Alpinia officinarum, ginger and curcuma, and docked them into the solvent accessible S3-S4 pocket of PLpro. Eight compounds from Alpinia officinarum and ginger bind with high in silico affinity to closed PLpro conformer, and hence are potential SARS-CoV-2 PLpro inhibitors. Our study reveal new lead compounds targeting SARS-CoV-2. Further structure based modifications or extract formulations of these compounds can lead to highly potent inhibitors to treat SARS-CoV-2 infections. 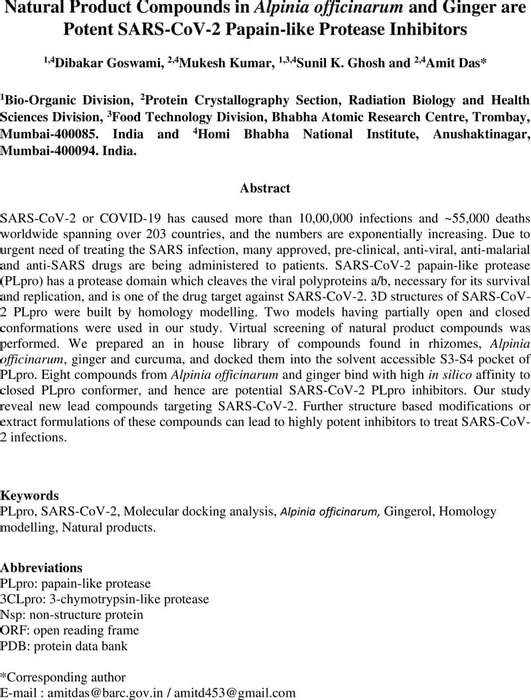 National Facility for Structural Biology and Department of Atomic Energy, Government of India