Electrochemical transistors have recently gained significant attention in the field of bioelectronics. In particular, the organic electrochemical transistor (OECT), a device that employs organic semiconductors as the active material, has been widely investigated as biosensors due to their low operational potentials, ability to operate in aqueous environments, biocompatibility, and the amplification of low-lying biological signals owing to the OECTs’ large transconductance. As such, OECTs have been utilized as biochemical sensors for monitoring of biomarkers or metabolites, with potential application for health monitoring for wearable devices in combination with internet of things (IoT).

The current working principle of biosensors based on OECTs relies on the reaction between the channel material and the analyte or intentionally generated intermediates that undergo direct or indirect electron transfer reactions with the channel material. This electron transfer reaction results in changes of the device channel conductivity with respect to the concentration of the analyte in a sample. While recent work has shown progress in development of biosensors based on this approach, it introduces several complications and disadvantages, namely unintended and uncontrolled chemical and electrochemical side reactions. First and foremost, this configuration does not allow the signal amplification one expects from a transistor device, thus invalidating the most often (and we show here erroneously) stated advantages of using OECTs for biosensing. Further, devices designed using this approach can rapidly degrade during the operation but more importantly, the results and their interpretation can lead to incorrect conclusions and render current devices unreliable for applications in health monitoring.

Our work addresses these challenges by i) isolating the chemical reaction from the OECT channel on a separate compartment and ii) employing enzymatic reactions to form intermediates that drives a reaction to power the OECT. In addition, this device architecture eliminates the need for an external gate voltage so only a single power source is required to monitor changes of the conductivity of the OECT channel material. Doing so also allows us to truly amplify the reaction current on the fuel cell from µA up to mA across the OECT (with ON/OFF ratios of 104), presenting significant improvements over conventional OECT biosensors that operate in the nA range, thereby eliminating the need for sophisticated measurement instrumentation. Our work goes in depth in elucidating general materials design parameters for the fuel cell OECT. Furthermore, the device operation mechanism was rationalized using electrochemical and electrical measurements of a variety of state-of-the-art materials for OECTs.

The development of this new device architecture presents an exciting new direction for sensing of metabolites and a low power, low cost and simple alternative approach to current technologies. Importantly, we also challenge some of the current thinking in the field of OECT-based biosensing. We believe that our findings will be of great interest to researchers in the fields of bioelectronics, biofuel cells and organic electronics. Additionally, our findings shine light on the working mechanism of enzymatic biosensors with OECTs. We believe that our approach will pave the way for implementation of OECT biosensors in real life applications due to the simplification of the backend circuitry that powers and synchronizes the gate and drain voltages. 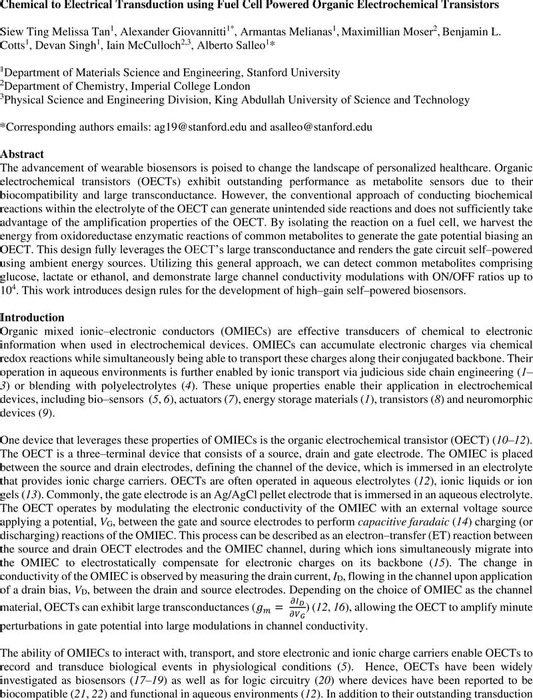