Solution chemistry effects on the solvation shell of metal ions

As natural aqueous solutions are far from being pure water, being rich in ions, the properties of solvated ions are of relevance for a wide range of systems, including biological and geochemical environments. We conducted ab initio and classical MD simulations of the alkaline earth metal ions Mg2+ and Ca2+ and of the alkali metal ions Li+, Na+, K+ and Cs+ in pure water and electrolyte solutions containing the counterions Cl– and SO42–. Through a detailed analysis of these simulations, this study reports on the effect of solution chemistry (composition and concentration of the solution) to the ion–water structural properties and interaction strength, and to the dynamics, hydrogen bond network, and low-frequency dynamics of the ionic solvation shell. Except for the ion–water radial distribution function, which is weakly dependent on the counter-ions and concentrations, we found that all other properties can be significantly influenced by the chemical characteristics of the solution. Calculation of the velocity autocorrelation function of magnesium ions, for example, shows that chlorine ions located in the second coordination shell of Mg2+ weaken the Mg(H2O)62+ hydration ‘cage’ of the cation. The result reported in this study suggest that ionic solvation shell can be significantly influenced by the interactions between other ions present in solution ions, especially those of opposite charge. In more general terms, the chemical characteristics of the solution, including the balance between ion-solvent and ion-ion interactions, could result in significant differences in behavior and function of the ionic solvation shell. 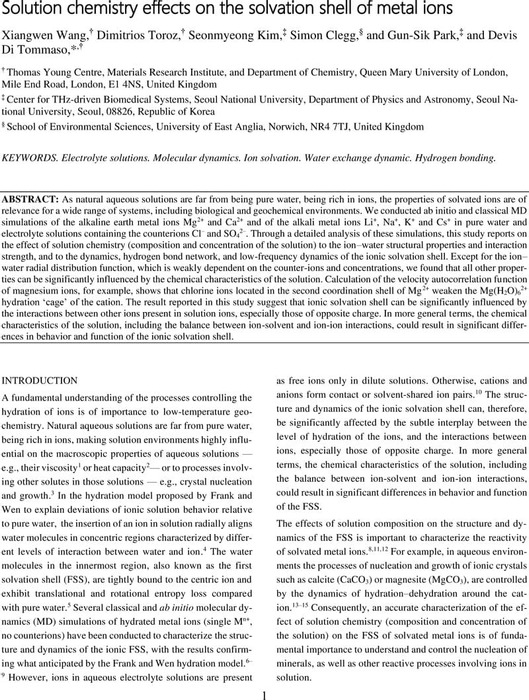 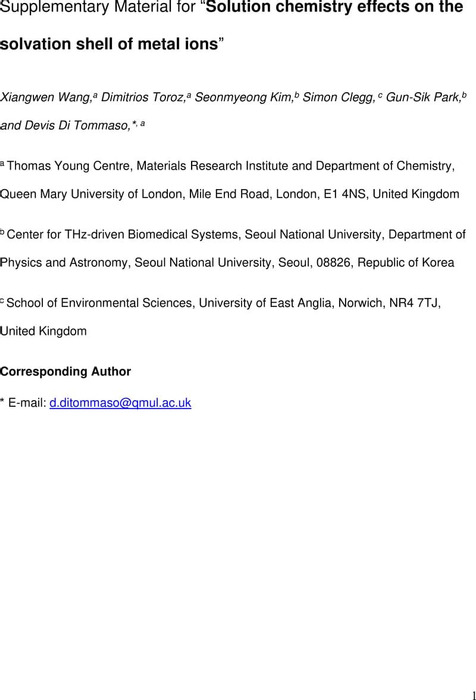 We are encoding your file so that it is compatible across browsers, depending on file size and type this may take some time.
SI MX ACS-ESC 2020-03-30

This project FUNMIN is funded through the ACT programme (Accelerating CCS Technologies, Horizon2020 Project No 294766). Financial contributions made from Department for Business, Energy & Industrial Strategy (BEIS).