A series of fac-[Mn(CO)3]+ complexes bearing 4-ethynyl-2,2'-bipyridine and 5-ethynyl-1,10-phenanthroline α-diimine ligands were synthetized, characterized and conjugated to vitamin B12, previously used as a vector for drug delivery, to take advantage of its water solubility and specificity toward cancer cells. The compounds act as photoactivatable carbon monoxide-releasing molecules (photoCORMs) rapidly liberating on average ca. 2.3 equivalents of CO upon photo-irradiation. Complexes and conjugates were tested for their anticancer effects, both in the dark and following photo-activation, against breast cancer MCF-7, lung carcinoma A549 and colon adenocarcinoma HT29 cell lines as well as immortalized human bronchial epithelial cells 16HBE14o- as the non-carcinogenic control. Our results indicate that the light-induced cytotoxicity these photoCORMs can be attributed to both their released CO and to their CO-depleted metal fragments (i-photoCORMs) including liberated ligands. 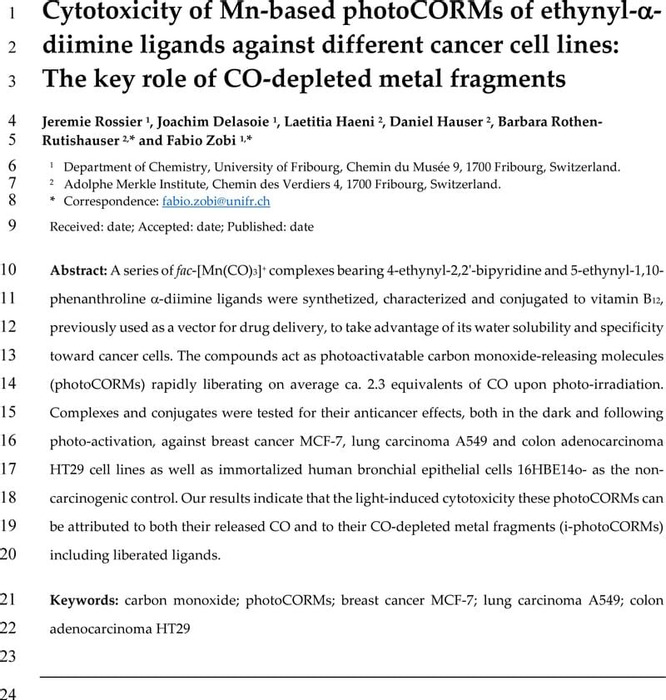 download asset Manuscript_Rossier et al_FZ_ESI.pdf 5 MB [opens in a new tab] cloud_download
pdf : 5 MB
We are encoding your file so that it is compatible across browsers, depending on file size and type this may take some time.