The amorphous silica (SiO2) shell on diatom frustules is a highly attractive biomaterial for removing pollutants from aquatic ecosystems. The surface activity of silica can be enhanced by modification with organosilanes. In this work, we present an atomic-level theoretical study based on Molecular Dynamics (MD) and dispersion-corrected Density Functional Theory (DFT-D3BJ) calculations on the surface stability and adsorption of heavy metal compounds on silane and APTES covered SiO2 surfaces. Our simulations show that at low APTES coverage, molecular adsorption of Cd(OH)2 and HgCl2 is more favourable near the modifier, compared to As(OH)3 that binds at the hydroxylated region on silica. At higher coverages, the metallic compounds are preferentially adsorbed by the terminating amino group on the surface, whereas the adsorption in the region between APTES and the oxide surface is also spontaneous. The adsorption is strongly driven by van der Waals interactions at the highly-covered surface, where the consideration of dispersion corrections reduces the modifier-adsorbate interatomic distances and increases the adsorption energy by c.a. 0.4-0.7 eV. The adsorption of water is favourable, although it is generally weaker than for the heavy metal compounds. Based on our results, we conclude that the addition of APTES modifiers on silica increases the adsorption strength and provides extra binding sites for the adsorption of heavy metal pollutants. These outcomes can be used for the design more efficient biomaterials’ structures for heavy metals depollution. 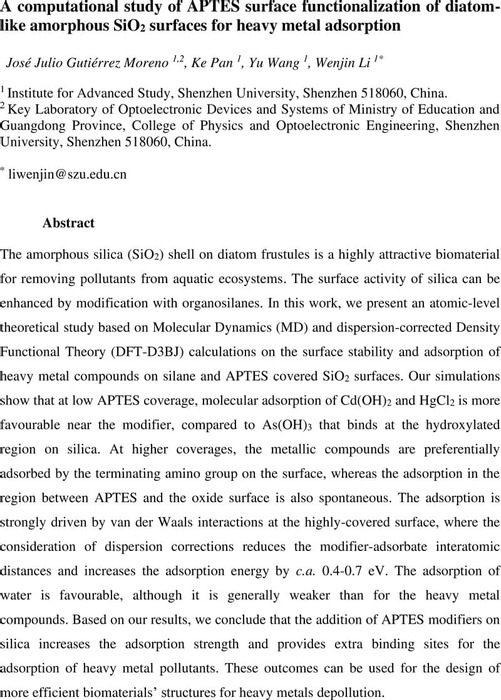 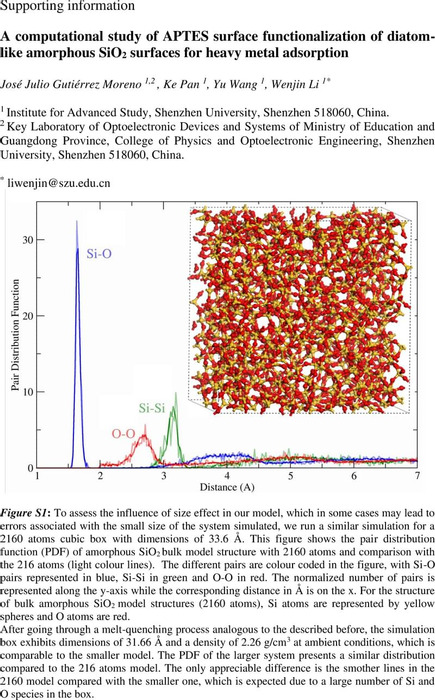 We are encoding your file so that it is compatible across browsers, depending on file size and type this may take some time.
SI - A computational study of APTES surface functionalization of diatom-like amorphous SiO2 surfaces for heavy metal adsorption