Synthesis, Characterization and Antiparasitic Activity of Organometallic Derivatives of the Anthelmintic Drug Albendazole

Helminthiases, a group of neglected tropical diseases, affect more than one billion people mainly in tropical and subtropical regions. Albendazole (ABZ) is a broad‐spectrum anthelmintic recommended by the World Health Organisation (WHO). However, drug resistance is emerging due to its widespread use. In order to tackle this problem, taking into account the spectacular results obtained with the organometallic derivatization of the antimalarial drug chloroquine, we have prepared, in this study, a series of new ferrocenyl and ruthenocenyl derivatives of the organic drug ABZ and assessed their activity against different helminths but also protozoans, namely Trichuris muris adult, Heligmosomoides polygygrus adult, Schistosoma mansoni adult, Giardia lamblia, Haemonchus contortus xL3s and Toxoplasma gondii to determine the full potential of our new compounds. Worthy of note, the ferrocene‐containing ABZ analogue 2d exhibited over 70% activity against T. muris adult in vitro and no toxicity to mammalian cells up to 100 µM. Against T. gondii, the ferrocene‐containing ABZ analogues 1a and 2d showed better in vitro activity than ABZ and low toxicity to the host cells. However, the activity of the analogous ruthenocenyl compound 2b against S. mansoni and T. gondii in vitro could rather be attributed to its toxicity towards the host cells rather than a specific antiparasitic activity. These results demonstrate that the choice of the organometallic moieties attached to the organic drug is playing a very important role. Two of our organometallic compounds, namely 1b and 2d, were tested in T. muris infected mice. At a 400 mg/kg dose, the compounds showed moderate worm burden reductions and low worm expulsion rates. Overall, this work, which is one of the first studies reporting the potential of organometallic compounds on a very broad range of parasitic helminths and protozoan, is a clear confirmation of the potential of organometallic complexes against parasites of medical and veterinary importance. 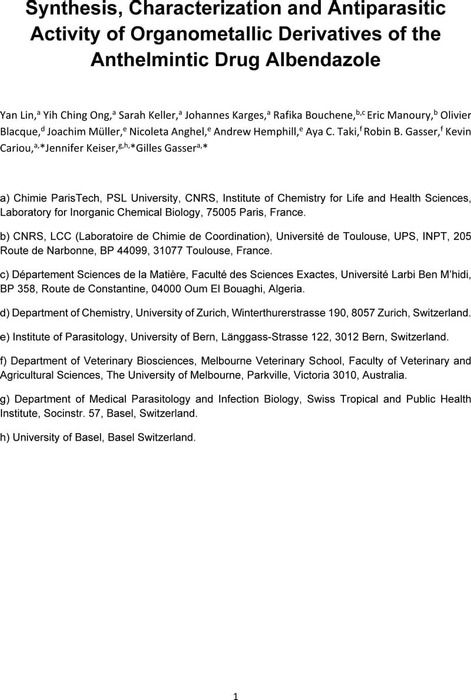 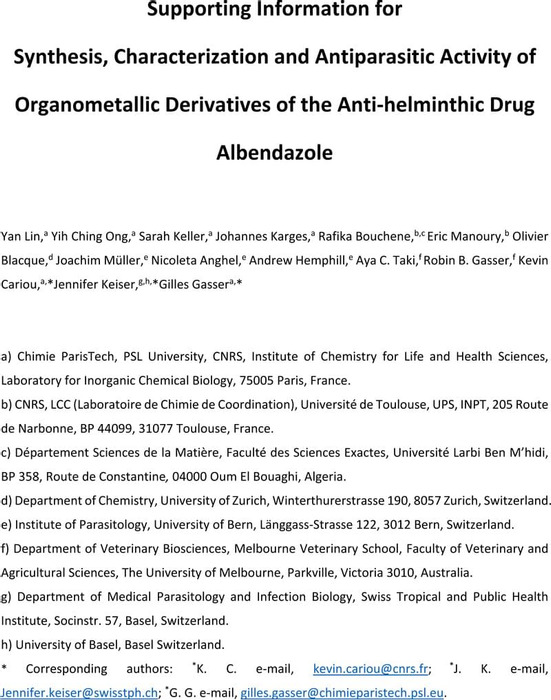