Sorption-desorption hysteresis (SDH) may control distributions of chemicals between diverse environmental phases, including soils and sediments. Formation of metastable states caused by pore deformation or inelastic swelling of a sorbent and their persistence during desorption were considered in the literature as one reason for "true" SDH. Such metastable states persisting during desorption lead to the lack of closure of sorption-desorption loop at non-zero sorbate concentrations, which is often observed in soil and environmental literature. Also, SDH was often characterized using single-point desorption isotherms (DIs) combining sorbed states reached during single desorption steps started from different points along a sorption isotherm (SI). The objective of this contribution is to demonstrate how the single-point DIs could be used to characterize SDH in liquid phase sorption experiments in terms of Gibbs free energy. This free energy is accumulated in some non-relaxed sorbed states belonging to DI as compared with the states of the same composition (sorbed concentration) belonging to SI. Using the literature data on SIs and single-point DIs of some polycyclic aromatic hydrocarbons and pesticides on soils and sediments, it is shown how these extra free energies could be obtained and how they could change in the selected sorbate-sorbent systems. When the extent of SDH decreases with increasing solute concentration, these additional free energies decline. They may remain constant or even increase, suggesting in the latter case that a larger work is needed to perturb a sorbent structure at higher sorbed concentrations. This paper proposes a novel approach for quantifying and understanding liquid phase SDH in the cases when a thermodynamic justification is sought, and, therefore, it advances the ability to predict the fate and activity of multiple chemicals in typical soil/sediment environments.

The revision (the Figures are embedded into the paper text) 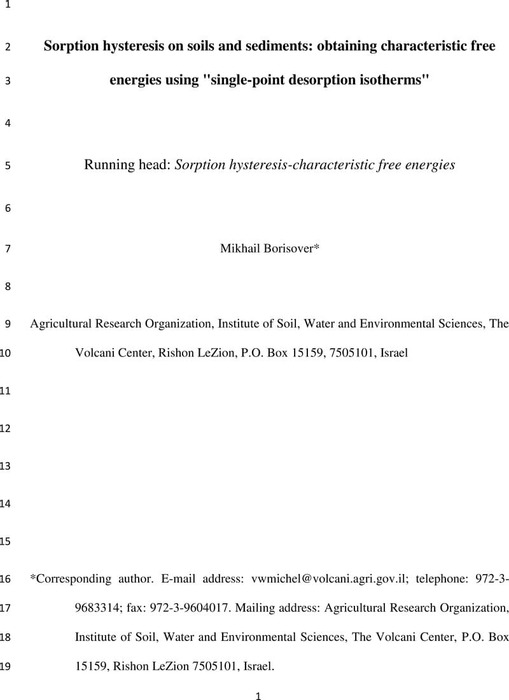