Signal transduction in living systems is the conversion of information into a chemical change and the principal process by which cells communicate. This process enables phenomena such as time-keeping and signal amplification. In nature, these functions are encoded in non-equilibrium (bio)chemical reaction networks (CRNs) controlled by enzymes. While these catalytically controlled processes are an integral part of biocatalytic pathways, man-made analogs are rare. Here, we incorporate catalysis in an artificial fuel driven out-of-equilibrium CRN. The study entails the design of an organocatalytically controlled fuel driven esterification CRN, where the forward (ester formation) and backward reaction (ester hydrolysis) are controlled by varying the ratio of two different organocatalysts: pyridine and imidazole. This catalytic regulation enables full control over ester yield and lifetime. The fuel-driven strategy is subsequently used in the design of a responsive polymer system, where transient polymer conformation and aggregation can be controlled through variation of fuel and catalysts levels. Altogether, we show how organocatalysis is an important tool to exert control over a man-made fuel driven system and induce a change in a macromolecular superstructure, as ubiquitously found in natural non-equilibrium systems. 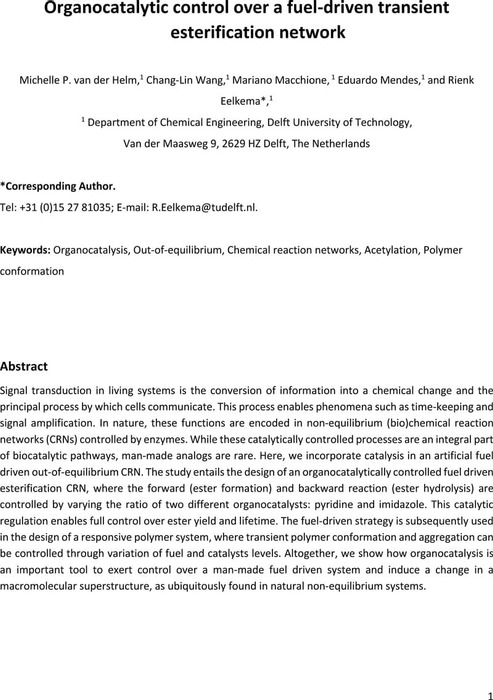 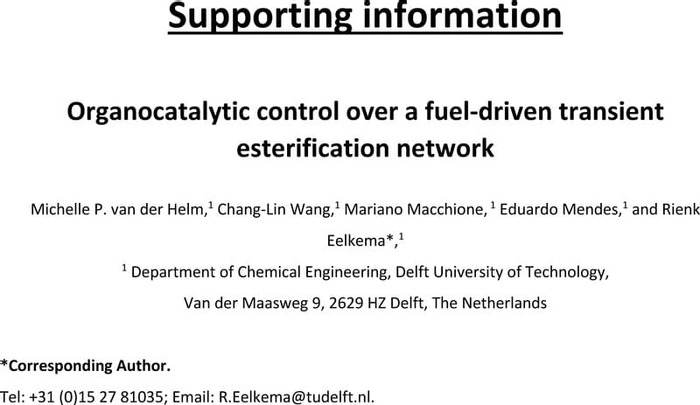 We are encoding your file so that it is compatible across browsers, depending on file size and type this may take some time.
Eelkema SI