Design, Synthesis and Pharmacological Profile of LUF7746, a Novel Covalent Partial Agonist for the Adenosine A1 Receptor

Partial agonists for G protein-coupled receptors (GPCRs) provide opportunities for novel pharmacotherapies with enhanced on-target safety compared to full agonists. For the human adenosine A1 receptor (hA1AR) this has led to the discovery of capadenoson, which has been in phase IIa clinical trials for heart failure. Accordingly, the design and profiling of novel hA1AR partial agonists has become an important research focus. In this study, we report on LUF7746, a capadenoson derivative bearing an electrophilic fluorosulfonyl moiety, as an irreversibly binding hA1AR modulator. Meanwhile, a nonreactive ligand bearing a methylsulfonyl moiety, LUF7747, was designed as a control probe in our study. In a radioligand binding assay, LUF7746’s apparent affinity increased to nanomolar range with longer pre-incubation time, suggesting an increasing level of covalent binding over time. Moreover, compared to the reference full agonist CPA, LUF7746 was a partial agonist in a hA1AR-mediated G protein activation assay and resistant to blockade with an antagonist/inverse agonist. An in silico structure-based docking study combined with site-directed mutagenesis of the hA1AR demonstrated that amino acid Y2717.36 was the primary anchor point for the covalent interaction. Additionally, a label-free whole-cell assay was set up to identify LUF7746’s irreversible activation of an A1 receptor-mediated cell morphological response. These results led us to conclude that LUF7746 is a novel covalent hA1AR partial agonist and a valuable chemical probe for further mapping the receptor activation process. It may also serve as a prototype for a therapeutic approach in which a covalent partial agonist may cause less on-target side effects, conferring enhanced safety compared to a full agonist. 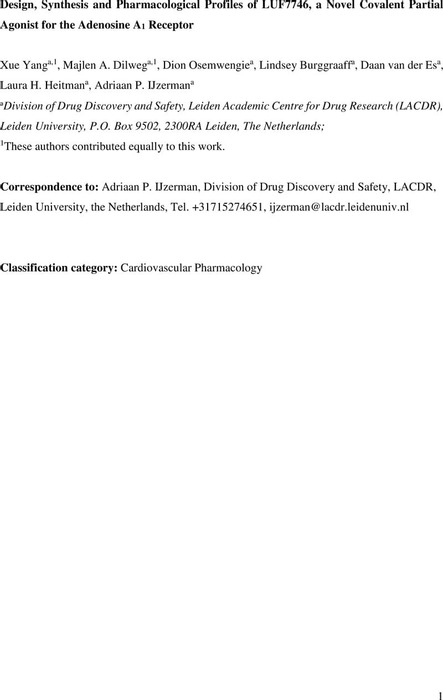 We are encoding your file so that it is compatible across browsers, depending on file size and type this may take some time.
Yang et al-Covalent Partial A1 Agonist

We are encoding your file so that it is compatible across browsers, depending on file size and type this may take some time.
Yang et al-Covalent Partial A1 Agonist-figures