Reported data in this paper are about Nafion 112 membrane standard tests and MEA activation tests of PEM fuel cell in various operation condition. Dataset include two general electrochemical analysis method, Polarization and Impedance curves. In this dataset, effect of different pressure of H2/O2 gas, different voltages and various humidity conditions in several steps are considered. Details of experimental methods has been explained in this paper. Behavior of PEM fuel cell during distinct operation condition tests, activation procedure and different operation condition before and after activation analysis can be concluded from data. In Polarization curves, voltage and power density change as a function of flows of H2/O2 and relative humidity. Resistance of the used equivalent circuit of fuel cell can be calculated from Impedance data. Thus, experimental response of the cell is obvious in the presented data, which is useful in depth analysis, simulation and material performance investigation in PEM fuel cell researches. 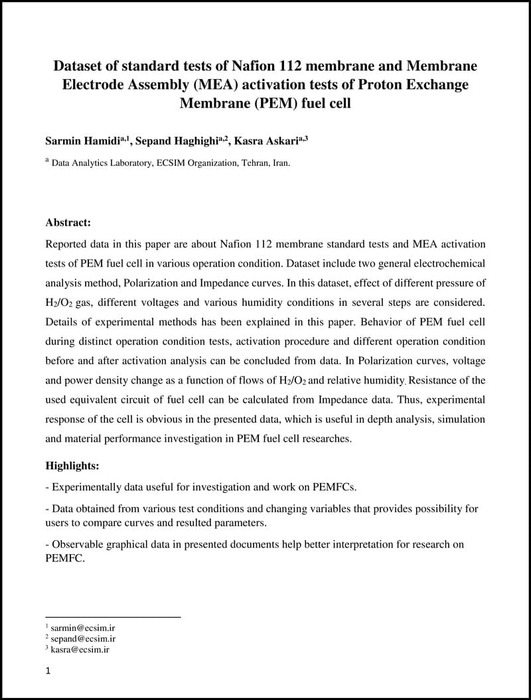 download asset Dataset_of_standard_tests_of_Nafion.pdf 1 MB [opens in a new tab] cloud_download
pdf : 1 MB
We are encoding your file so that it is compatible across browsers, depending on file size and type this may take some time.