Prompted by recent reports of large errors in noncovalent interaction (NI) energies obtained from many-body perturbation theory (MBPT), we compare the performance of second-order Møller–Plesset MBPT (MP2), spin-scaled MP2, dispersion-corrected semilocal density functional approximations (DFA), and the post-Kohn–Sham random phase approximation (RPA) for predicting binding energies of supramolecular complexes contained in the S66, L7, and S30L benchmarks. All binding energies are extrapolated to the basis set limit, corrected for basis set superposition errors, and compared to reference results of the domain-based local pair-natural orbital coupled-cluster (DLPNO-CCSD(T)) or better quality. Our results confirm that MP2 severely overestimates binding energies of large complexes, producing relative errors of over 100% for several benchmark compounds. RPA relative errors consistently range between 5-10%, significantly less than reported previously using smaller basis sets, whereas spin-scaled MP2 methods show limitations similar to MP2, albeit less pronounced, and empirically dispersion-corrected DFAs perform almost as well as RPA. Regression analysis reveals a systematic increase of relative MP2 binding energy errors with the system size at a rate of approximately 0.1% per valence electron, whereas the RPA and dispersion-corrected DFA relative errors are virtually independent of the system size. These observations are corroborated by a comparison of computed rotational constants of organic molecules to gas-phase spectroscopy data contained in the ROT34 benchmark. To analyze these results, an asymptotic adiabatic connection symmetry-adapted perturbation theory (AC-SAPT) is developed which uses monomers at full coupling whose ground-state density is constrained to the ground-state density of the complex. Using the fluctuation–dissipation theorem, we obtain a nonperturbative “screened second-order” expression for the dispersion energy in terms of monomer quantities which is exact for non-overlapping subsystems and free of induction terms; a first-order RPA-like approximation to the Hartree, exchange, and correlation kernel recovers the macroscopic Lifshitz limit. The AC-SAPT expansion of the interaction energy is obtained from Taylor expansion of the coupling strength integrand. Explicit expressions for the convergence radius of the AC-SAPT series are derived within RPA and MBPT and numerically evaluated. Whereas the AC-SAPT expansion is always convergent for nondegenerate monomers when RPA is used, it is found to spuriously diverge for second-order MBPT, except for the smallest and least polarizable monomers. The divergence of the AC-SAPT series within MBPT is numerically confirmed within RPA; prior numerical results on the convergence of the SAPT expansion for MBPT methods are revisited and support this conclusion once sufficiently high orders are included. The cause of the failure of MBPT methods for NIs of large systems is missing or incomplete “electrodynamic” screening of the Coulomb interaction due to induced particle–hole pairs between electrons in different monomers, leaving the effective interaction too strong for AC-SAPT to converge. Hence, MBPT cannot be considered reliable for quantitative predictions of NIs, even in moderately polarizable molecules with a few tens of atoms. The failure to accurately account for electrodynamic polarization makes MBPT qualitatively unsuitable for applications such as NIs of nanostructures, macromolecules, and soft materials; more robust non-perturbative approaches such as RPA or coupled cluster methods should be used instead whenever possible. 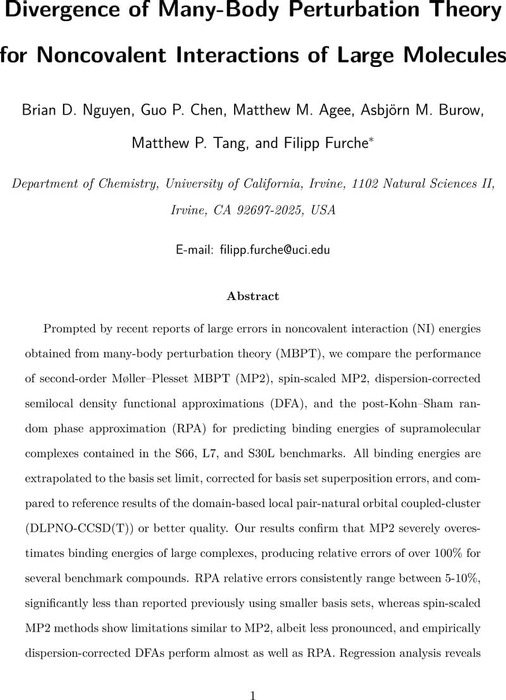 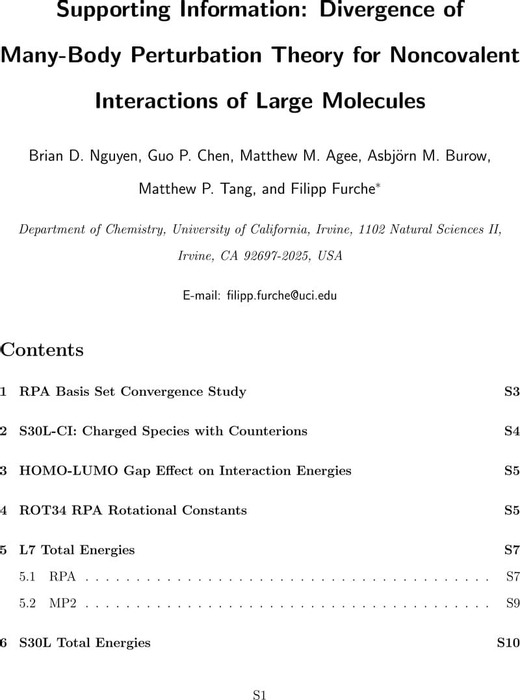 We are encoding your file so that it is compatible across browsers, depending on file size and type this may take some time.
si

The authors declare the following competing financial interest(s): Principal investigator Filipp Furche has an equity interest in Turbomole GmbH. The terms of this arrangement have been reviewed and approved by the University of California, Irvine, in accordance with its conflict of interest policies.