Molecules and materials that demonstrate large amplitude responses to minor changes in their local environment play an important role in the development of new forms of nanotechnology. Molecular daisy chains are a type of a mechanically interlocked molecule that are particularly sensitive to such changes where, in the presence of certain stimuli, the molecular linkage enables muscle-like movement between a reduced-length contracted form and an increased-length expanded form. To date, all reported syntheses of molecular daisy chains are accomplished via passive-template methods, resulting in a majority of structures being switchable only through the addition of an exogenous stimuli such as metal ions or changes in pH. Here, we describe a new approach to these structural motifs that exploits a multi-component active-metal template synthesis to mechanically interlock two pi-rich nanohoop macrocycles into a molecular daisy chain which we show can be actuated through simple thermal changes. 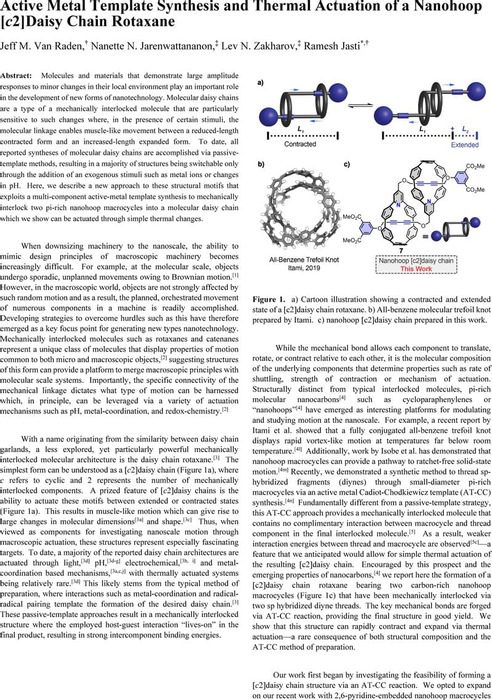 download asset AT Manuscript.pdf 8 MB [opens in a new tab] cloud_download
pdf : 8 MB
We are encoding your file so that it is compatible across browsers, depending on file size and type this may take some time.