Metal−organic frameworks (MOFs) with coordinatively unsaturated metal sites are appealing as adsorbent materials due to their tunable functionality and ability to selectively bind small molecules. Through the use of computational screening methods based on periodic density functional theory, we investigate O2 and N2 adsorption at the coordinatively unsaturated metal sites of several MOF families. A variety of design handles are identified that can be used to modify the redox activity of the metal centers, including changing the functionalization of the linkers (replacing oxido donors with sulfido donors), anion exchange of bridging ligands (considering μ-Br-, μ-Cl-, μ-F-, μ-SH-, or μ-OH- groups), and altering the formal oxidation state of the metal. As a result, we show that it is possible to tune the O2 affinity at the open metal sites of MOFs for applications involving the strong and/or selective binding of O2. In contrast with O2 adsorption, N2 adsorption at open metal sites is predicted to be relatively weak across the MOF dataset, with the exception of MOFs containing synthetically elusive V2+ open metal sites. As one example from the screening study, we predict that exchanging the μ-Cl- ligands of M2Cl2(BBTA) (H2BBTA = 1H,5H-benzo(1,2-d:4,5-d′)bistriazole) with μ-OH- groups would significantly enhance the strength of O2 adsorption at the open metal sites without a corresponding increase in the N2 affinity. Experimental investigation of Co2Cl2(BBTA) and Co2(OH)2(BBTA) confirms that the former exhibits only weak physisorption, whereas the latter is capable of chemisorbing O2 at room temperature. The chemisorption behavior is attributed to the greater electron-donating character of the μ-OH- ligands and the presence of H-bonding interactions between the μ-OH- bridging ligands and the O2 adsorbate. 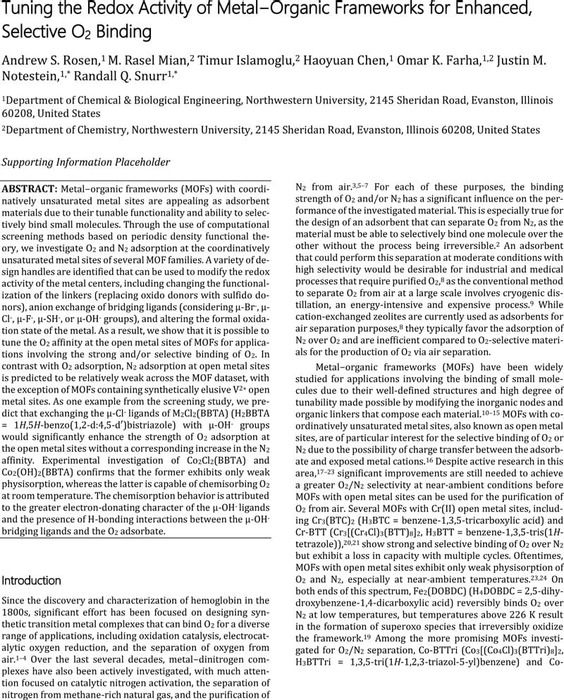 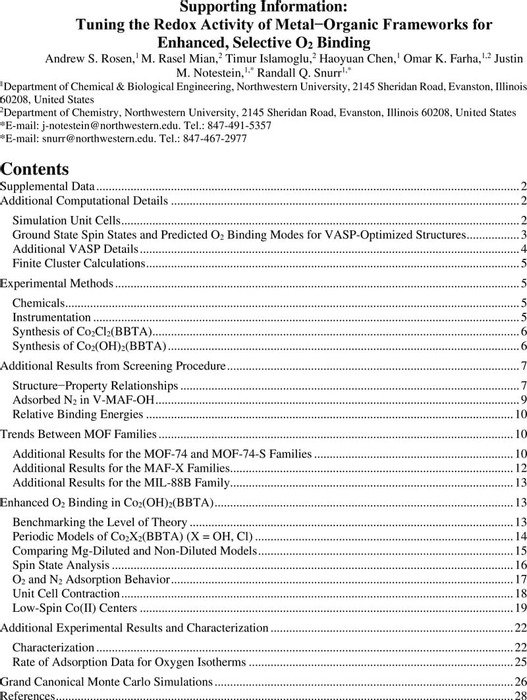 We are encoding your file so that it is compatible across browsers, depending on file size and type this may take some time.
o2 paper SI

We are encoding your file so that it is compatible across browsers, depending on file size and type this may take some time.
TOC image

O.K.F. and R.Q.S. have a financial interest in NuMat Technologies, a startup company that is seeking to commercialize MOFs.