In an attempt to synthesize potent blockers of the influenza A M2 S31N proton channel with modifications of amantadine, we used MD simulations and MM-PBSA calculations to project binding modes of compounds 2-5, which are analogues of 1, a dual blocker. Blocking both the S31N mutant and the wild type (WT) M2, 1 is composed of amantadine linked to an aryl head group, (4-methoxy-2-hydroxy)-benzyl. Compound 6, used as control, has an 3-(thiophenyl)isoxazolyl aryl head group, and selectively blocks M2 S31N (but not WT) in an aryl head group “out” (i.e. N-ward) binding orientation. We then tested 1-6 as anti-virals in cell culture and for M2 binding efficacy with electrophysiology (EP). The new molecules 2-5 have a linker between the adamantane and amino group which can be as small as a CMe2 in rimantadine derivative 2, or longer like phenyl in 3. Alternatively, we explored the impact of expanding the diameter of adamantane with diamantyl or triamantyl in 4 and 5, respectively. Antiviral effects against A/WSN/33 and its M2 WT revertant (M2 N31S) were seen for all six compounds except for 5 vs. the native (S31N) virus and (as predicted from previous studies) 6 vs. the WT revertant. Compounds 1-5, projected to bind in a polar head group “in” (C-ward) orientation, strongly block proton currents through M2 WT expressed in voltage-clamped oocytes with fast association rate constants (kon), and slow dissociation rate constants (koff). Surprisingly, 2-5, projected to bind in a polar head group out orientation, do not effectively block M2 S31N-mediated proton currents in EP. The results from MD and MM-PBSA calculations suggested that compounds 2-5 can be fully effective at blocking the M2 channel when present. The low degree of blocking in M2 S31N is due to their kinetics of binding observed in EP, i.e. two orders of magnitude reduction in kon compared to 6, and a fast off rate constant similar to that of 6, which is consistent with steered-MDsimulations. The low kon values can be interpreted from MD simulations, which suggest distortions to V27 cluster of the M2 S31N caused by the longer (even by one methylene) hydrophobic segment from adamantane to aryl head group, appropriate to fit from G34 to V27. The deformations in the N-terminus may be sufficiently energetic for 2-5 (compared to 6) to cause the observed low kon. 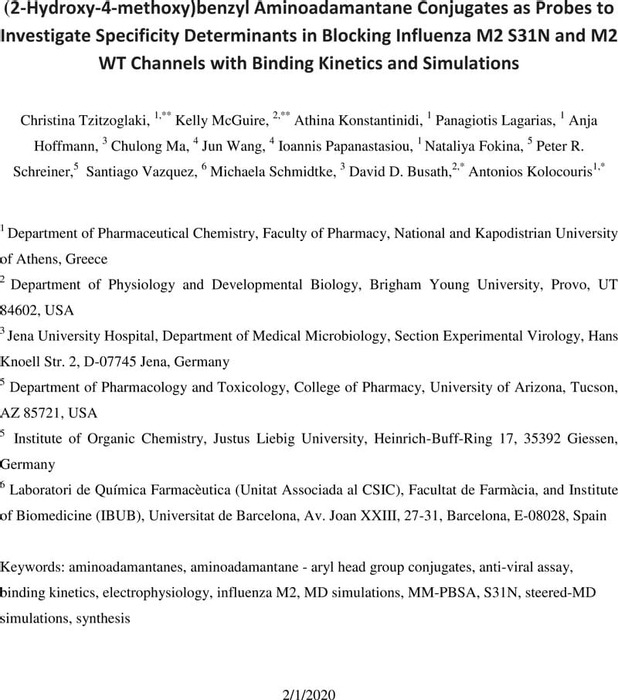 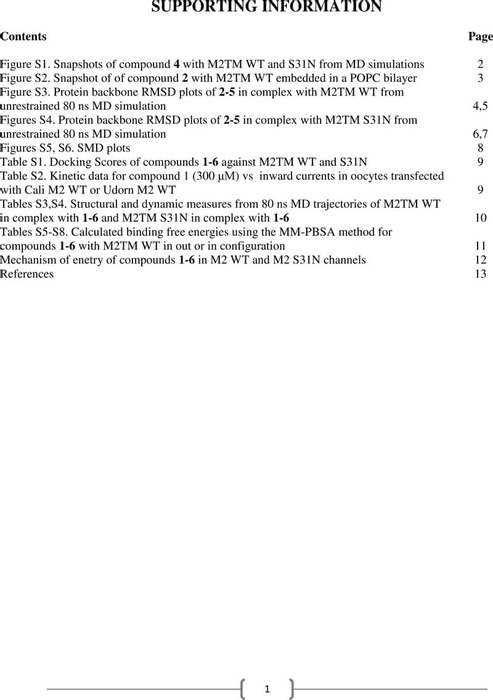 We are encoding your file so that it is compatible across browsers, depending on file size and type this may take some time.
SI SAR 02.01.2019