The expansion of the genetic alphabet with additional, unnatural base pairs (UBPs) is an important and long standing goal in synthetic biology. Nucleotides acting as ligands for the coordination of metal cations have advanced as promising candidates for such an expansion of the genetic alphabet. However,the inclusion of artificial metal base pairs in nucleic acids mainly relies on solid-phase synthesis approaches and very little is known on polymerase-mediated synthesis. Herein, we report on the selective and high yielding enzymatic construction of a silver-mediated base pair as well as a two-step protocol for the synthesis of DNA duplexes containing a metal UBP. Guided by DFT calculations, we also shed light into the mechanism of formation of this UBP as well as into the structural and energetic preferences. Even though this silver UBP is not directly amenable to in vitro selection experiments, the enzymatic synthesis of this UBP provides valuable insights for the design of future, more potent systems aiming at expanding the genetic alphabet. 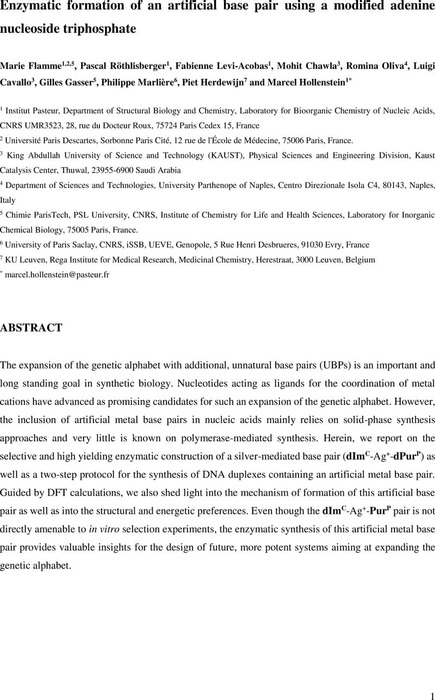 We are encoding your file so that it is compatible across browsers, depending on file size and type this may take some time.
Supporting information