As a prominent and representative example of flexible metal-organic frameworks (MOFs), DUT-49(Cu) has gained attention due to the unique phenomenon of Negative Gas Adsorption (NGA); originating from an unprecedented struc-tural contraction during the gas adsorption. Herein, post-synthetic metal exchange is demonstrated to afford DUT-49 frameworks with a wide variety of metal cations, e.g. Mn2+, Fe2+, Ni2+, Zn2+, Cu2+ and Cd2+. The single-crystal-to-single-crystal conversion allowed to characterize the new MOFs by single crystal X-ray diffraction, indicating identical struc-ture and topology, as that of previously explored DUT-49(Cu) framework. This approach is proven successful in achieving Mn-Mn and Cd-Cd dimers, which are rare examples of M-M paddle-wheel SBUs. The relative stability and flexibility of the resulted frameworks are observed to be highly sensitive to the metal ion of the framework, following the trends predicted by Irving-Williams series. DUT-49(Ni) was recognized as a second material from DUT-49 series showing adsorption-induced transitions. A sequential increase in framework flexibility from rigid to flexible and from flexible to NGA has been achieved through selective incorporation of metal centers into the structure. Finally, hetero-metallic structures are formed by selective and controlled exchange of metal ions to finely tune the flexibility and NGA phenomenon of the framework. 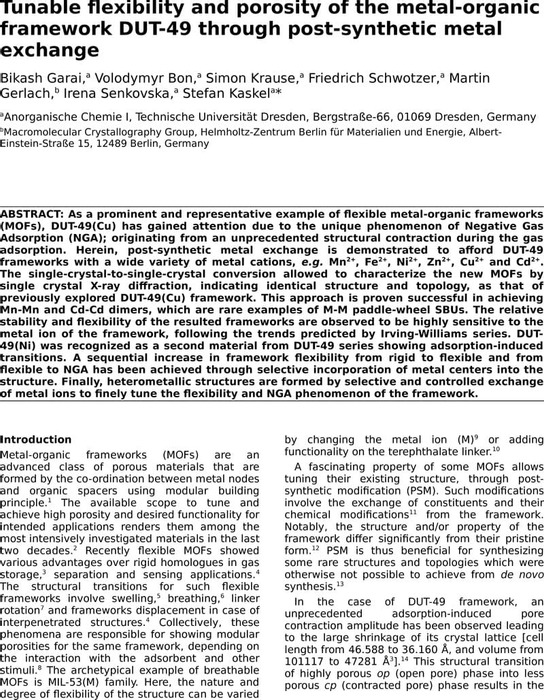 We are encoding your file so that it is compatible across browsers, depending on file size and type this may take some time.
Submit Supporting Information cm-2019-047699

We are encoding your file so that it is compatible across browsers, depending on file size and type this may take some time.
CIFs combined

No conflict of interests is declared