A computational and experimental study of the hydrazine-catalyzed ring-opening carbonyl-olefin metathesis of norbornenes is described. Detailed theoretical investigation of the energetic landscape for the full reaction pathway with six different hydrazines revealed several crucial aspects for the design of next-generation hydrazine catalysts. This study indicated that a [2.2.2]-bicyclic hydrazine should offer substantially increased reactivity versus the previously reported [2.2.1]-hydrazine due to a lowered activation barrier for the rate-determining cycloreversion step, a prediction which was verified experimentally. Optimized conditions for both cycloaddition and cycloreversion steps were identified, and a brief substrate scope study for each was conducted. A complication for catalysis was found to be the slow hydrolysis of the ring-opened hydrazonium intermediates, which were shown to suffer from a competitive and irreversible cycloaddition with a second equivalent of norbornene. This problem was overcome by the strategic incorporation of a bridgehead methyl group on the norbornene ring, leading to the first demonstrated catalytic carbonyl-olefin metathesis of norbornene rings. 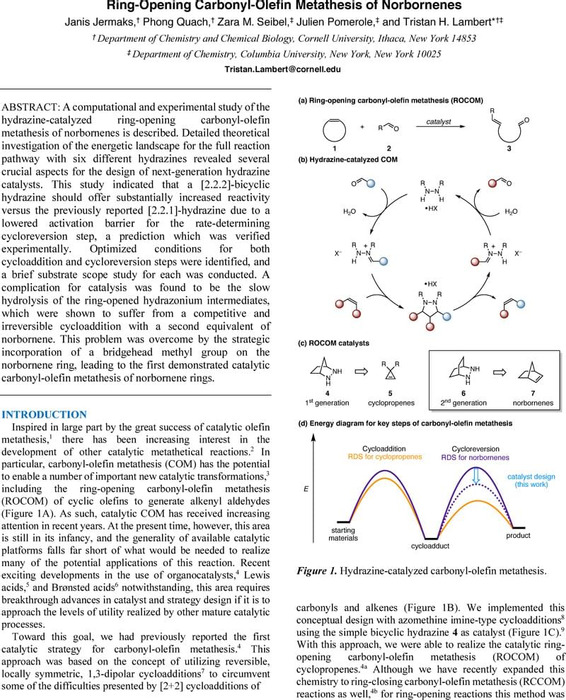