While oxygen-17 NMR is increasingly being used for elucidating the structure and reactivity of complex molecular and materials systems, much effort is still required for it to become a routine analytical technique. One of the main difficulties for its development comes from the very low natural abundance of oxygen-17, which implies that isotopic labeling is generally needed prior to NMR analyses. However, 17O-enrichment protocols are often unattractive in terms of cost, safety, and/or practicality, even for compounds as simple as metal oxides. Here, we demonstrate how mechanochemistry can be used in a highly efficient way for the direct 17O-isotopic labeling of a variety of s-, p- and d-block oxides which are of major interest for the preparation of functional ceramics and glasses: Li2O, CaO, Al2O3, SiO2, TiO2, and ZrO2. For each oxide, the enrichment step was performed under ambient conditions in less than 1 hour and at low cost, which makes these synthetic approaches highly appealing in comparison to the existing literature. Using high-resolution 17O solid state NMR and Dynamic Nuclear Polarization, atomic-level insight into the enrichment process is achieved, especially for titania and alumina. Indeed, it was possible to demonstrate that enriched oxygen sites are present not only at the surface, but also within the oxide particles. Moreover, information on the actual reactions occurring during the milling step could be obtained by 17O NMR, both in terms of their kinetics and the nature of the reactive species. Finally, it was demonstrated how high resolution 17O NMR can be used for studying the reactivity at the interfaces between different oxide particles during ball-milling, especially in cases when X-ray diffraction techniques are uninformative. More generally, such investigations will be useful not only for producing 17O-enriched precursors efficiently, but also for understanding better mechanisms of mechanochemical processes themselves. 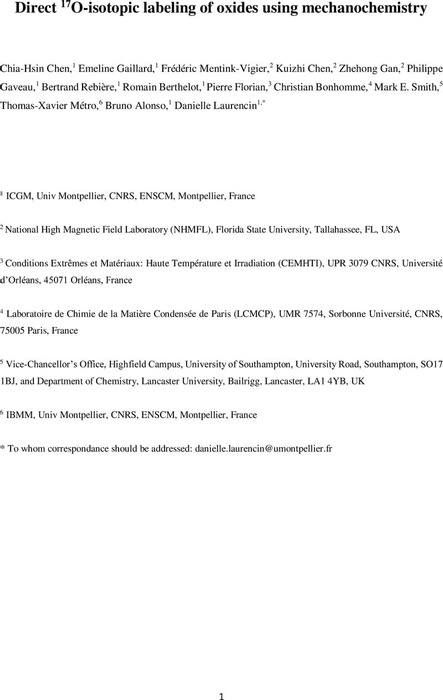 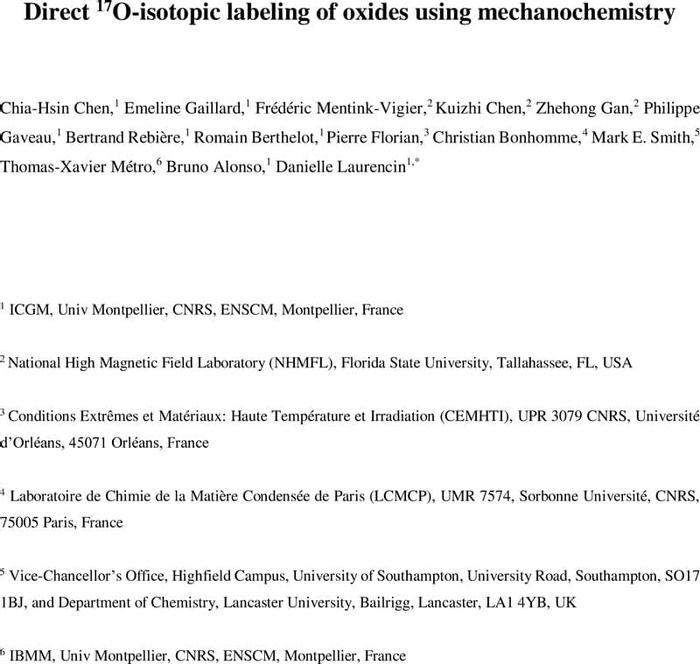 We are encoding your file so that it is compatible across browsers, depending on file size and type this may take some time.
ESI final