Demystifying and Unravelling the Factual Molecular Structure of the Biopolymer Sporopollenin

Sporopollenin is a natural, highly cross-linked biopolymer composed of carbon, hydrogen, and oxygen, which forms the outer wall of pollen grains. Sporopollenin is resilient to chemical degradation. Because of this stability, its exact chemical structure and the biochemical pathways involved in its biosynthesis remains a mystery and unresolved.

We have identified and characterized the molecular structure of the clean, intact sporopollenin using soft ionization mass spectrometric and nuclear magnetic resonance techniques. These analyses showed that sporopollenin contained a poly(hydroxyacid) dendrimer-like network, which accounted for the sporopollenin empirical formula. In addition, the identified hydroxy acid monomers contained a beta diketone moiety, which most probably accounts for the known antioxidant activity of sporopollenin. Moreover, our elucidation studies allowed us to identify a unique circular polyhydroxylated tetraketide polymer. This polymer acted as the rigid backbone on which the poly(hydroxyacid) network can be built, forming the scaffold of the spherical sporopollenin exine. 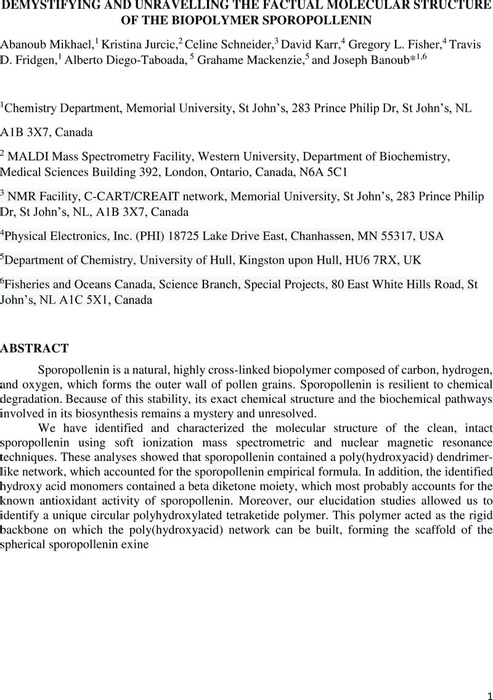 We are encoding your file so that it is compatible across browsers, depending on file size and type this may take some time.
18th NOV supporting information