The thermal Spin Crossover (SCO) phenomenon refers to an entropy-driven spin transition in some materials based on d6-d9 transition metal complexes. While its molecular origin is well known, intricate SCO behaviours are increasingly common, in which the spin transition occurs concomitantly to e.g. phase transformations, solvent absorption/desorption, or order-disorder processes. The computational modelling of such cases is challenging, as it requires accurate spin state energies in the solid state. Density Functional Theory (DFT) is the best framework, but most DFT functionals are unable to balance the spin state energies. While few hybrid functionals perform better, they are still too expensive solid-state minima searches in moderate-size systems. The best alternative is to dress cheap local (LDA) or semi-local (GGA) DFT functionals with a Hubbard-type correction (DFT+U). However, the parametrization of U is not straightforward due to the lack of reference values, and because ab initio parametrization methods perform poorly. Moreover, SCO complexes undergo notable structural changes upon transition, so intra- and inter-molecular interactions might play an important role in stabilizing either spin state. As a consequence, the U parameter depends strongly on the dispersion correction scheme that is used. In this paper, we parametrize U for nine reported SCO compounds (five based on FeII, 1-5 and four based on FeIII, 6-9) when using the D3 and D3-BJ dispersion corrections. We analyze the impact of the dispersion correction treatments on the SCO energetics, structure, and the unit cell dimensions. The average U values are different for each type of metal ion (FeII vs. FeIII), and dispersion correction scheme (D3 vs. D3-BJ) but they all show excellent transferability, with mean absolute errors (MAE) below chemical accuracy (i.e. MAE < 4 kJ/mol). This enables a better description of SCO processes and, more generally, of spin state energetics, in materials containing FeII and FeIII ions. 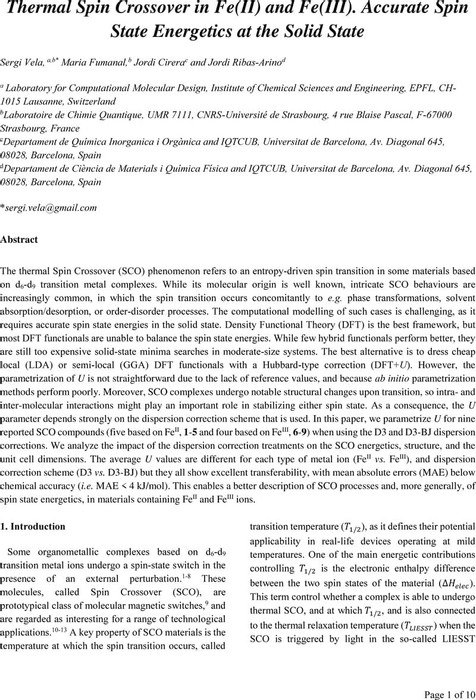 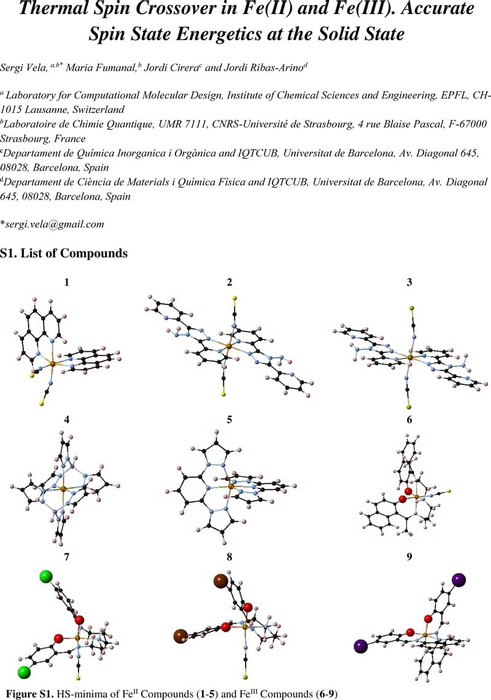 We are encoding your file so that it is compatible across browsers, depending on file size and type this may take some time.
Supporting Info

The authors declare no conflict of interests