The fluoroquinolone class of antibiotics have a well-established structure-activity relationship (SAR) and a long history in the clinic, but the effect of electron-rich benzofused substituents at the N1 position remains poorly explored. Groups at this position are part of the topoisomerase-DNA binding complex and form a hydrophobic interaction with the major groove of DNA. Molecular modelling techniques were employed to select benzofused substituents that were shown to enhance this interaction of fluoroquinolones for the DNA gyrase target. Seven N1-modified fluoroquinolones were synthesised and tested against a panel of Gram-negative pathogens to determine minimum inhibitory concentration (MIC) values. Gram-negative outer membrane penetration was investigated using the membrane permeabiliser polymyxin B nonapeptide (PMBN) and the target affinity of representative compound 6e was determined in a cell-free environment. A correlation between N1 substituent hydrophobicity and activity was observed across the MIC panel, with compound activity decreasing with increased hydrophobicity. Those compounds with highest hydrophobicity were inactive due to poor solubility profiles whereas compounds with intermediate hydrophobicity were inactive due to impaired outer membrane penetration and reduced inhibition for the DNA gyrase target, the latter in contrast to modelling predictions. This study adds new information to the fluoroquinolone SAR and suggests limited utility of large hydrophobic substitution at the N1 position of fluoroquinolones. 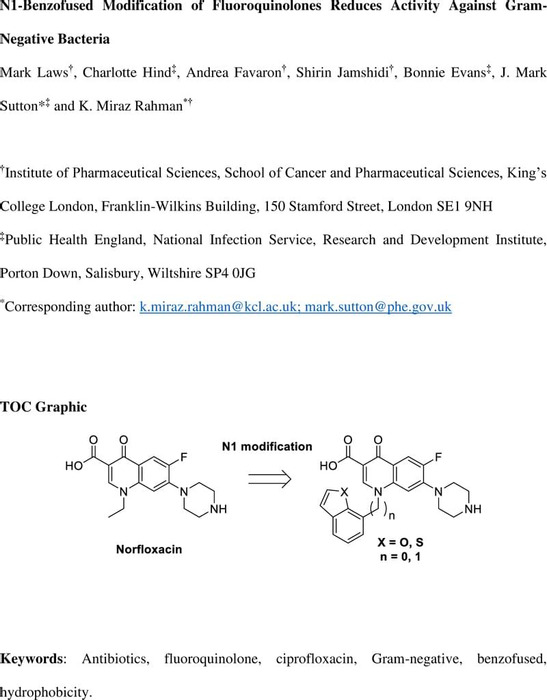 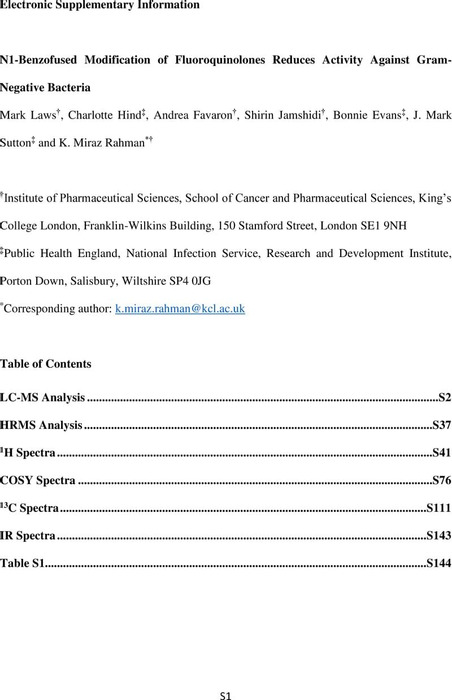 We are encoding your file so that it is compatible across browsers, depending on file size and type this may take some time.
Rahman ACS Omega SI document 14 11 2019