The redox non-innocence of the TAML scaffold in cobalt-TAML (Tetra-Amido Macrocyclic Ligand) complexes has been under debate since 2006. In this work we demonstrate with a variety of spectroscopic measurements that the TAML backbone in the anionic complex [CoIII(TAMLred)]- is truly redox non-innocent, and that one-electron oxidation affords [CoIII(TAMLsq)]. Multi-reference (CASSCF) calculations show that the electronic structure of [CoIII(TAMLsq)] is best described as an intermediate spin (S = 1) cobalt(III) center that is antiferromagnetically coupled to a ligand-centered radical, affording an overall doublet (S = ½) ground-state. Reaction of the cobalt(III)-TAML complexes with PhINNs as a nitrene precursor leads to TAML-centered oxidation, and produces nitrene radical complexes without oxidation of the metal ion. The ligand redox state (TAMLred or TAMLsq) determines whether mono- or bis-nitrene radical complexes are formed. Reaction of [CoIII(TAMLsq)] or [CoIII(TAMLred)]- with PhINNs results in formation of [CoIII(TAMLq)(N•Ns)] and [CoIII(TAMLq)(N•Ns)2]-, respectively. Herein, ligand-to-substrate single-electron transfer results in one-electron reduced Fischer-type nitrene radicals (N•Ns-) that are intermediates in catalytic nitrene transfer to styrene. These nitrene radical species were characterized by EPR, XANES, and UV-Vis spectroscopy, high resolution mass spectrometry, magnetic moment measurements and supporting CASSCF calculations. 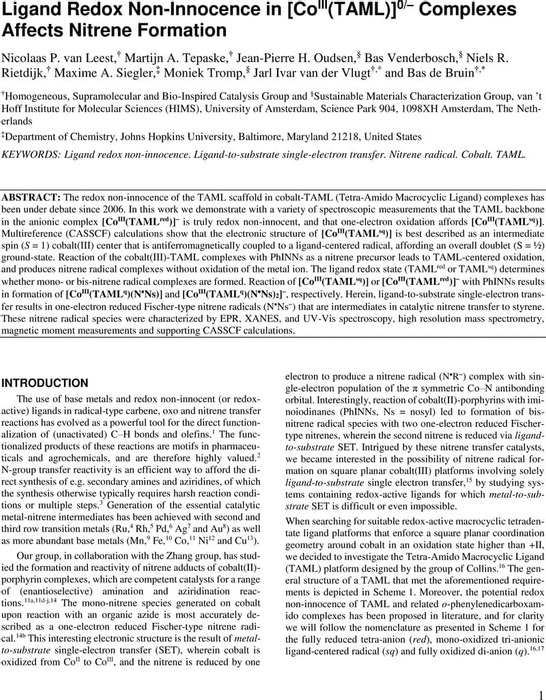 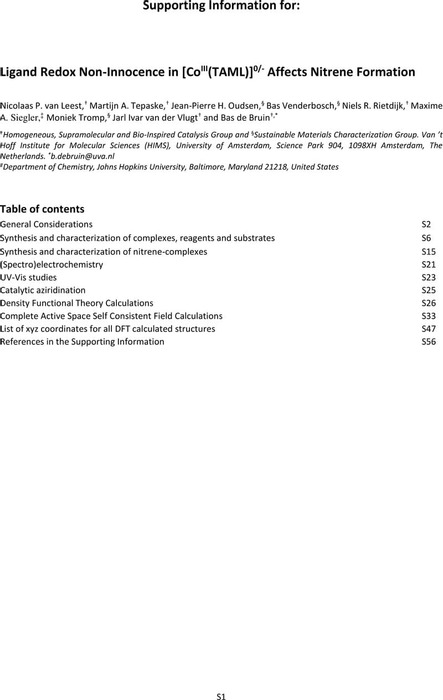 We are encoding your file so that it is compatible across browsers, depending on file size and type this may take some time.
Supporting Information CoTAMLNitrenes Final ChemRXiv