We provide the first observation and characterization of super-electrophilic metal cations on a solid support. For Pd/SSZ-13 the results of our combined experimental (FTIR, XPS, HAADF-STEM) and density functional theory study reveal that Pd ions in zeolites, previously identified as Pd+3 and Pd+4, are in fact present as super electrophilic Pd+2 species (charge-transfer complex/ion pair with the negatively charged framework oxygens). In this contribution we re-assign the spectroscopic signatures of these species, discuss the unusual coordination environment of “naked” (ligand-free) super-electrophilic Pd+2 in SSZ-13, and their complexes with CO and NO. With CO, non-classical, highly positive [Pd(CO)2]2+ ions are formed with the zeolite framework acting as a weakly coordinating anion (ion pairs). Non-classical carbonyl complexes also form with Pt+2 and Ag+ in SSZ-13. The Pd+2(CO)2 complex is remarkably stable in zeolite cages even in the presence of water. Dicarbonyl and nitrosyl Pd+2 complexes, in turn, serve as precursors to the synthesis of previously inaccessible Pd+2-carbonyl-olefin [Pd(CO)(C2H4)] and -nitrosyl-olefin [Pd(NO)(C2H4)] complexes. Overall, we show that zeolite framework can stabilize super electrophilic metal (Pd) cations, and show the new chemistry of Pd/SSZ-13 system with implications for adsorption and catalysis.

Version 2. In Version 2 we: a). expanded the introduction and discussion parts. b). added more data and information to the Supplementary information, further corroborating our findings c). all the conclusions remain the same as in Version 1. 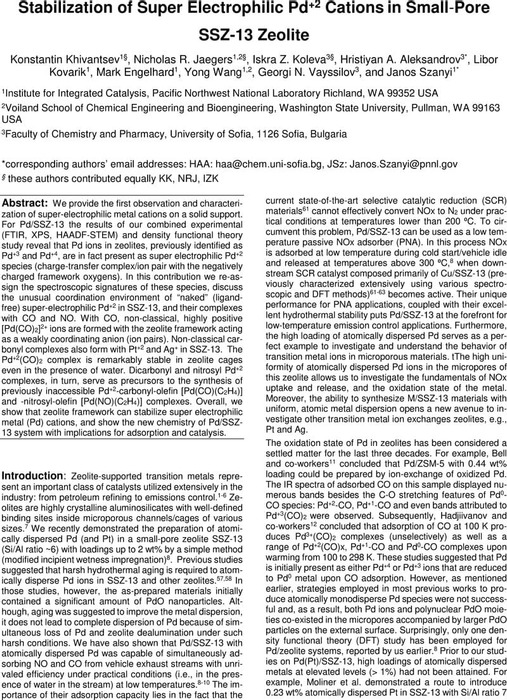 We gratefully acknowledge the U.S. Department of Energy (DOE), Office of Energy Efficiency and Renewable Energy, Vehicle Technologies Program for the support of this work. Most of the research described in this paper was performed in the Environmental Molecular Sciences Laboratory (EMSL), a national scientific user facility sponsored by the DOE's Office of Biological and Environmental Research and located at the Pacific Northwest National Laboratory (PNNL). PNNL is oper-ated for the US DOE by Battelle. H.A.A. and I.Z.K. acknowledge financial support by the Bulgarian Science Fund (project DFNI‐T02/20). The computational work was supported by the European Regional Development Fund and the Opera-tional Program “Science and Education for Smart Growth” under contract UNITe No. BG05M2OP001‐1.001‐0004‐C01 (2018–2023).